Along with my random thoughts that I blogged about last week is my love for lists. I cracked up when I watched, "I Don't Know How She Does It," with Sarah Jessica Parker and she's writing lists in her mind while she lies awake at night. I do that. But I have such a terrible memory that I have to write my list down. I use both my phone and my Franklin Covey planner. 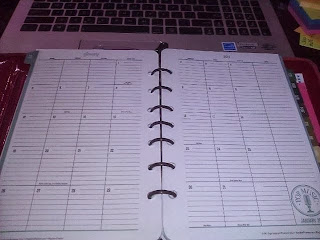 This is what an old school Franklin Covey day planner looks like.


I write my lists in my day planner and I put my appointments in my phone/computer calendar. I am constantly adding to my list and moving items from my list from one day to the other. I hate when I don't do something, forget to move it on in my calendar to another day and then it just falls off. When I go back and review the last month and it irks me to find something without a check or an arrow that just didn't get done. I'm just weird like that.

After two or more years of hearing about GIRLS from my sister I finally sat down and watched Season 1 on Amazon & On Demand. Of course I was hooked! It is such a smart, funny, quirky, weird show about so many different weird characters. I finished Season 2 right before Season 3 started and I cried during the last show. It was so sweet and sad.

I both admire Lena Dunham and I'm jealous. Jealous is such a strong word and people are so critical of it. Poor word. I think it gets such a bad rap. I think jealousy is a very natural feeling, especially when regular people feel a slight jealousy towards super successful people like movie stars and screenplay writers. What I think is more crazy is when people are jealous of other regular people like them.

I posted this on Facebook recently:  Sometimes I do what we should never do and I let a celebrity like Lena Dunham, who is only 27 and has accomplished soooo much already, make me feel like a failure at 43.5. BUT THEN I read this on Wikipedia, "Her father, Carroll Dunham, is a painter of "overtly sexualized pop art", and her mother, Laurie Simmons, is a photographer and designer who creates artistic domestic scenes with dolls." and that Meryl Streep was a neighbor and family friend at their summer rental house in Connecticut and somehow I don't feel so bad after all. I am the star of my own story! (Just a random thought)

Yeah, we really shouldn't compare ourselves to people in general, but especially not people who got a head start in life. It reminds me of the hilarious article that I read, in the fashion of articles  that say, "Five things that successful people do right when they wake up." This one is called, "11 Things Super Successful People Do Before They're Even Born!" People who are born to successful parents who have a summer house in Connecticut and are neighbors with Meryl Streep are on this list.

I know better. I know not to compare myself to others. I am just me. I am an original, unlike anyone else and I need to own that. That's what my writing is all about.
Posted by ShoeGirl Corner at 5:30 PM