I read a wonderful quote today on someone's Instagram page. "Caring for yourself is not self-indulgence, it's self-preservation." - Audre Lorde 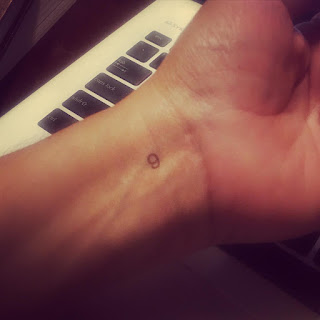 My temporary #9 tattoo that I'm testing. Wrist or arm, where I had the picc line inserted?

This quote is so significant for a number of reasons!

First let's start with the fact that it's a quote by Audre Lorde, a feminist icon. I'm embarrassed to say I didn't know who she was. My 19 year old daughter who is a sophomore pre-med student and wants to be an OBGYN, and who is also taking feminist classes in college, had to tell me she is a feminist icon.

Second. I recently joined a book club, which in itself was self-indulgent and amazing. I love that it has me reading on a regular basis again and that it has me reading outside of my comfort zone. I prefer fiction, but this has me reading non-fiction and graphic novels. I don't think I would have ever read a graphic novel, if it weren't for this book club. I'm so happy I found it. Reading again, regularly, is a big part of caring for myself. Feeding my brain is one of the things that is the most important in my life.

Third. I found this quote on the page of another Peloton member. I LOVE that the main admin of our page, Working Moms of Peloton, asks us periodically to share our Instagram pages and to support one another. I've followed numerous fellow members and I have 30+ new followers today because of her last post. I feel like these type of followers are the MOST legit because they are people who I have a lot in common with. I love that! So when I saw this quote on one of the mom's pages I thought it was just perfect.

Fourth. The words of my 5th grade teacher, Ms. Lula Rivers, will forever play in my head. I was passing out pencils for a test and I forgot to give myself a pencil first. She shook her head and told me, "You should have given yourself a pencil first. Self-preservation." I was 11 years old and I will never forget that lesson. We have to take care of ourselves in order to take care of others.

Working out and taking care of yourself IS NOT self-indulgent. It is definitely self-preservation. Life is not a dress rehearsal, it's the real thing. We only get one shot at it and we have to do it right. Or if you got started wrong, like I did, you have to re-commit and get it right. Our health is a big part of this because that's what decides if you will have a long life or a short life.

I had blood work done for my annual physical this past week and I was so happy with the results. All my hard work this past year was worth it! I brought down my A1c  (my hemoglobin) level almost TWO whole points. That's epic! I also brought down my cholesterol and my doctor said that my liver and kidneys looked great.

This made me feel so much closer to my goals. I still have a lot of weight and sizes to go, but knowing that I'm doing all the right things to make sure that the inside is doing good makes it so much more valuable than what I look like on the outside.

Take care of yourself, do the things that matter to you first. Make sure you have a plan and that you're working that plan. My plan is to know what I'm doing every evening, instead of just playing it by ear.  I have days for writing and reading and I have days for doing the Peloton and studying Italian. A schedule keeps me on track and so much happier. I hope that you can find a schedule that works for you.

Posted by ShoeGirl Corner at 11:59 PM No comments:

Time is of Essence

When I was a little girl and my mom woke me up in the morning for school I always felt like time went by so fast. One morning, as my mom was pulling at my hair to make my ponytails, I asked her, "Why does time go by faster in the morning when I'm getting dressed for school?" My mother, being a mom, thought that was adorable and repeated it to my dad and family. 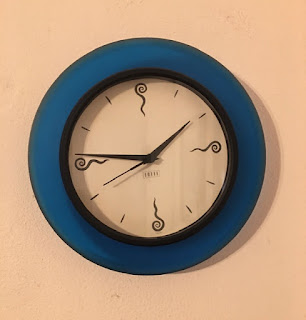 Time is tricky. At least it always has been for me, since I was a little girl, and even now as an older woman. Sometimes I wake up earlier than usual on a weekend and I think that I have so much time, only to find myself getting on my Peloton, or running errands, just as late as the days when I wake up later.
Recently I was thinking about the years that I belonged to an organized religion and all of the time spent in worship and preaching. At one time we had three meetings a week, two lasted for two hours and one lasted one hour. We also went out preaching on Saturdays and occasionally on Sundays. Add on top of that, the time to get ready, the drive time and the time spent chitchatting after the meeting. If I am being conservative, I spent twelve hours per week on religion, possibly fifteen. I was a part of that religion from birth until I was forty-two. Those are a lot of years and a lot of hours.
Since I left my religion in 2012 I have given myself back fifteen hours a week. What have I been doing with that time since 2012? Seven of those years were taken up by Miranda's lacrosse. Her father and I spent a lot of time taking her, picking her up, and going to games. So I know where that time went. I also spent time driving my dad to church and to his restaurant and picking him up.
My father has been gone for two and a half years now. Miranda graduated from high school one year ago, so now I ask myself, "Where did those 15 hours per week go this last year?" AND more importantly, now that I am aware of these 15 hours that I've gifted myself, what am I going to do with that time now?
Let's add something else into the mix. I have been working from home for 25 weeks now, 12 of those have been at my new job. Working from home has added back two hours per day that I used commuting. That's 10 hours per week. So now I'm at 25 hours per week! That's approximately 3.5 hours per day of extra time!
Let me ask that question again. "What am I going to do with that extra time?" That leaves so many extra hours in the week to do the things that I love, like writing, reading, working on my little libraries, learning about art, making art, working on my cemetery preservation project and making time to exercise. The trick is not letting other things rob me of that time.
This year has been a lot about self-discipline. I've been working on balance and choices. I need to work on these things to make the time to work out. I also need self-discipline to eat right, to make the right choices, and to do things I want to do. I also need to be self-disciplined about my time.
For example, I feel like my whole life I've been trying to write fiction. I start and I restart, but I never give it the time I should. I let other things get in the way and lead me astray, time and time again. I am tired of doing that and if I am ever going to get anything worthwhile written it needs to be now. I need to reserve part of those fifteen hours a week strictly for writing.
I am fifty years old and if there are two things I want to accomplish in this short life that I have left is this. I want to get to the point when exercise and eating healthy are second nature AND I want to be a published writer. Second, I want to spend time on things that bring me joy like reading, art, and my non-profit work. I cannot use the excuse that I don't have the time. Period.
Posted by ShoeGirl Corner at 8:37 PM No comments: