Yes, we are less than one month away from the first day of school now. We are exactly 4 weeks away, to the day. The summer flew by. Miranda finished her five week summer school schedule at Kinkaid EMSI and she was invited back for her third summer. We were thrilled for her! She made it to the final 20 who will complete the courses next summer. For their final summer they apply for internships in math, science and engineering. 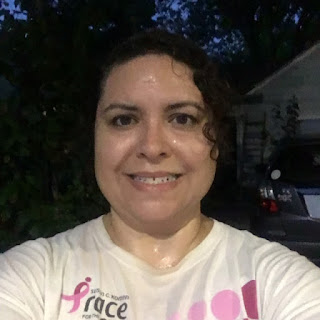 Me, super sweaty after a run in the Houston humidity.

In other Summer News:

I grew up in Houston and I know Houston summers, so what compelled me to start running outside this summer is beyond me. However I've done it and I've survived! Of course there's still August, which is considered the hottest month of the year here.

I started my whole exercise thing exactly 3 months ago today so it's an anniversary of sorts. I started running one block and walking one block on June 5. Then on July 19, just a week ago, I started running two blocks and walking one block. I'm going to keep doing this for a month and then I'll start running three blocks. At least that's the plan. I'm training for a 5K run in the fall!! I'm thinking the MECA Day of the Dead Run but we will see if I'm ready for one before that one on October 30.

I went back to look at old blog posts and the last time I ran was 8 years ago!!! Even then, it was running inside a gym on a treadmill and nothing like this. This is running on a whole new level!

The thing is this. This can't be a temporary thing. This has to be a lifestyle change or I will end up a diabetic on Metformin for the rest of my life, ruining my liver. OR on insulin because that will be it and I'll be at the point of no return and I will definitely have a very short life that will end before 70. I like to compare it to this. When I was in my 20s it was "Last call for alcohol and now it's Last call for health." THIS is it! This is the last chance for my health and if I don't do it now it's never going to happen.

After 10 months at my new job, not so new now, I am finally taking a full one week vacation. Since I'm still not rich I had to do the most affordable thing that was still interesting. Day trips with me packing a lunch for the day. We are going to Washington on the Brazos, the Beach of course because it's summer, and finally either museums or another day trip nearby. Then the kids are off to San Antonio for a week to visit the grandparents. I'm planning on going to pick them up and going to the caverns on the way back. We've been wanting to do that for a while.

When we get back that only leaves two full weeks for shopping for uniforms and school supplies. Then it's Back to School time before we know it.

Posted by ShoeGirl Corner at 3:11 PM No comments: