On February 11 I turned 49 years old while in Las Vegas, one of the most fun places in the world. While we were there I asked my best friends Vicki and Angie, "Why did we never come here when we were younger?" I feel like we missed out on a whole bunch of years when we could have really had fun. Unlike now when we are older and tamer. 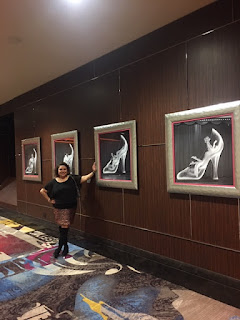 In the Cosmopolitan Hotel, where we stayed, in front of a row of pictures from the Silver Slipper. The Silver Slipper was a casino in Paradise, Nevada that operated from September 1950 to November 29, 1988 and was originally owned by Howard Hughes.

I had an amazing birthday surrounded by two of my best friends, my sister and my niece. There's too much to write so I'll leave it at that for now.
Posted by ShoeGirl Corner at 11:44 PM No comments: