Playing Coyote, the Board Game That Is 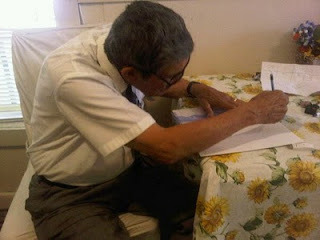 My Daddy drawing the Coyote game in my kitchen.
My dad came over on Sunday to just hang out for a while and to visit. He's 86 so he often gets a little bored and comes by to visit me or goes by my sisters' homes. Since I have the privilege of living right by him I get to see him the most but the way I see it my kids get more opportunities to get to know their grandfather. I didn't know any of my grandparents and my kids have my dad, my in-laws, and a set of great-grandparents, who coincidentally are close to the same age as my dad. Fortunate kids!
On this particular visit my dad said he wasn't hungry so he just asked for something to drink. I made him a drink (yes that kind of drink) and we talked for a while. I set up the ironing board in the kitchen so I could iron work clothes while we visited.
Then I got the idea of telling the kids about how I used to play "Coyote" with my dad. Before you get any crazy ideas, Coyote is a board game. My dad would draw on a thin cardboard and we would use buttons for the pieces. One large button represents the coyote and twelve smaller buttons represent the sheep.
The kids instantly became interested, just like they do in hearing stories about my dad's adventures as a little boy. My son asked my dad if he could draw the game for them. My daughter got busy looking for thirteen buttons. My dad drew the game out on a thin cardboard sheet that I had (an empty sheet out of Seth's unfinished Creative Memories baby book) and my kids watched intently. When he was finished he explained the rules of the game.
The coyote lives in the center of the board. The sheep are all on one side of the board. One opponent is the coyote and the other plays the sheep. The object of the game for the coyote player is to eat all the sheep. The coyote jumps the sheep if the player leaves an opening on the other side and eats them (very similar to checkers). The sheep are trying to corner the coyote in so that he can't move any more. If the sheep succeed that player wins. If the coyote eats all the sheep well obviously the coyote wins.
I have fond memories of playing this game with my dad as a little girl and now the kids know how to play it too. My dad played a couple of games with my daughter and then he played with my son. My daughter was tough to beat and I don't think he ever did beat her. My son, being younger, learned the basics of the game and my dad said that once he learns it well he'll be a fierce opponent.
When I was telling two of my friends about the game and I mentioned the buttons one friend said, "It sounds so Depression Era," and it is! My father played this same game when he was a little boy in the 1930s. I Googled the game and I couldn't find anything about it. Another Coyote board game comes up, but it's not the same one.
It is such a fun game I'm thinking of videotaping my dad explaining how to draw the board and a demonstration. Then I'll put it out on YouTube so others can enjoy the game. It is one of those things from my dad's generation that will be lost if we don't record it.
The game is easy and cheap to make, but best of all it was a great bonding experience between two distant generations. As I watched my kids play with my dad I thought about how these are the same kids who play on electronically hand held games and on the Internet. Yet here they were playing an old fashioned hand-drawn board game with a man who was their age almost 80 years ago. Priceless.
Posted by ShoeGirl Corner at 1:07 PM

Wow That is amazing. I loved reading this post. I can imagine your children's faces, I guess they were having fun smiling while they were playing with their granpa. It is sad to see how new generations are changing. Children are becoming less interested in games, plays, songs or any kind of movement activities. Thanks God for those grandfathers who are still sharing their knowledge with the new generations. The games sounds very interesting and about your children's experience, I loved it!