Update on Schools and Kinkaid EMSI 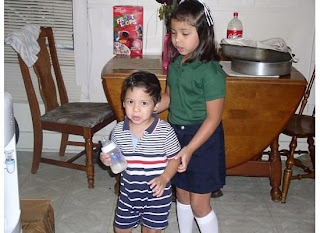 Miranda's first day of Kinder and Seth trying to get into the picture.
Kinkaid EMSI:
When I was in elementary school I thought I was really smart. I was chosen by my principal to take a test to attend a Vanguard middle school and I passed and was accepted. When I arrived at Hamilton Middle School in the Heights I quickly found out that I wasn’t as smart as I thought. I found out that I never really learned the seven continents, where the Tropic of Cancer or Tropic of Capricorn were and other important geography lessons I should have learned in elementary school. Thank goodness I at least knew about the equator!  So although, yes I probably was the smartest kid in my class in elementary school, I learned that other kids at other schools had received a better education than I had.  That was the first time I really understood that different schools received different funding and different resources and that this affected the quality of education that kids receive. (A topic I have written about in the past.)

I struggled in the Vanguard program but I never gave up. I worked hard until the very last 9 weeks of the 8th grade when I finally made honor roll for the very first time in my three years in middle school.  Also in 8th grade other kids who were taking Algebra, and had probably made good grades all along, were invited to apply to a summer program. I first heard about Kinkaid when I was in 8th grade and only 14 years old. Before the school year was over we knew what students had been accepted so I had an idea of who was going. I remember feeling a little jealous but I also realized and accepted that my strengths did not lie in math and science.

I forgot about Kinkaid but later throughout the four years of high school I would hear about it now and then from some friends who were attending the program each summer. All I knew was that Kinkaid was a very prestigious private high school in Memorial and that every summer they had a math and science program for public school students.


Around 15 years later when my step-daughter was living with us and attending middle school she was invited to apply to Kinkaid and she was accepted. This was a wonderful opportunity for her and she thrived that summer. She was accepted to return but sadly she decided to return to Louisiana to live with her mother so she didn’t get to complete the program.
In the years since Facebook became a place to reconnect with old friends I have been back in touch with middle school friends. I quickly noticed something interesting.  All of my middle school friends who attended the summer program at Kinkaid are successful adults. At least two are attorneys and one is an aerospace engineer. Others are HR executives and sales managers.  I found that trend interesting.


Now my daughter is 14. Unlike me, she’s very good at math and science and she attends a Vanguard middle school like I did. I hadn’t heard about Kinkaid in a long time but I assumed the program still did exist so I decide to Google it. It does and I was very interested to learn the history. The summer program is called the EMSI- The Kinkaid Engineering, Math and Science Institute and it was founded in 1975. It is completely underwritten by Houston companies, foundations and generous donors.
I told Miranda about it and she was very interested.. She applied and we were so excited for her when she was accepted. I’m so proud of all of the things that she’s accomplished thus far and I hope that she builds on that foundation this summer at Kinkaid.

When she was accepted, and I checked to make sure that they had received our postcard, I told the program’s director the trend I had noticed in friends who attended Kinkaid. She thanked me for sharing that note and she said she would share this with their donors. I’m glad because I think it’s important for organizations and individuals who give to educational programs like this to know that they truly do make a difference and that they'll make a difference in this little girl's life.

I can not stress enough how the quality of education that our children receive makes such a difference in their future. I didn't attend an elementary school with a lot of funding but thank goodness I attended a better middle school and high school. Thank goodness I was a part of the Magnet programs at these schools and I received an even better education because of the Vanguard and IB programs.

Now that I'm a mother I understand how these programs shaped my life and I want even more for my children. That's why I've worked so hard to make sure that my kids also attend magnet schools and that they have the best education available to them. I want them to do more and to be more than I was. I want for them what every parent wants for their child.
Posted by ShoeGirl Corner at 3:17 PM No comments: