Daddy Can No Longer Be Located

I originally received this email from TMobile's FamilyWhere in March 2018 after my dad passed away and I cancelled his phone line. This is the GPS service I had on his phone so I could find him when he wouldn't answer his phone. I was going to post it or blog about it back then, but I wasn't ready. I don't know if I ever will be, even now, but here it is. 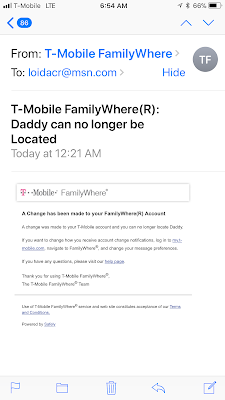 I've started this blog post at least three times and I've never finished it. I've thought to myself what could I possibly say that I haven't already said about my dad in numerous Facebook posts, Latina Lista Padre Care blogs, this blog and our YouTube Dicho a Day. Many of you have reached out to me and told me that you felt like you knew him.

The reason I finally pulled myself together to continue writing this blog post is because five friends and loved ones have lost parents in the last month. First my 26 year old nephew lost his father to a brief battle with cancer. Then I had three co-workers lose their father and their mothers all in a row. Finally, a dear friend of mine from high school lost her father and I attended the funeral services yesterday.

All these losses have brought back so many memories about losing both my parents. I found that the wounds can still be uncovered,even 19 years later after losing my mother. I learned that I was still sensitive about her death when I know deep down that there is no reason to feel that way.

I remember what my mother always said about funerals. What matters is if you saw that person when they were still alive.

Yes, I saw my parents when they were still alive. A lot. I lived with them until I was 28. I was with my mother from the hospital to her house and I slept in her bed with her the day before she passed away. My father lived with me the last four and a half years of his life.

I wasn't with either one of them at the moment that they took their last breath but I was with them. I was with them when they were alive and they both knew how much I loved them. That's all that matters.

Posted by ShoeGirl Corner at 4:34 PM No comments: