Why We Should Be Talking About Menopause

I've been using the Period Tracker app for the last couple of years. Ever since I wanted to keep up with what months I was skipping and more importantly how many months in a row I went without a period.

I blogged about menopause and periods and how they shouldn't be taboo subjects in March of 2019 because I hadn't had a period since August of 2018 and the very next month in April I had one. I like looking at the log charts on this app because it tells me exactly when I had a period and when it stopped and started again. It's a great tracker if you're trying to get pregnant and you want to know when you're ovulating, but it's also a great tracker when you're at the end of the road like I am.  I had my last period in October of 2019 and it took me a few months to realize it.
After my toe surgery I started on my quest to reach 200 rides on my Peloton. I started a count-down on my Franklin Planner. When I got to October to add a 200 sticker to my target date I found a couple of stickers that said "Done!" and "This is big." I was confused because I thought they were in reference to my 200 Peloton rides. Then I realized that I had put those stickers there when I had an idea I would be reaching 12 months without a period by that date. I had put them there as a count-down to the end. You have to skip 12 consecutive months to be considered in menopause and I knew that October 30 was my goal date. 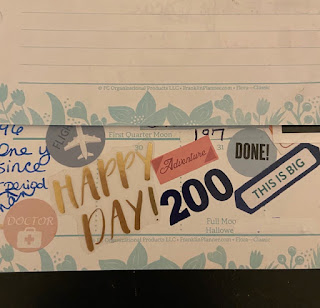 A year and a half ago I also talked about the veil of secrecy around menopause. I thought it was really interesting that it is a taboo subject because it's related to periods and aging. How can talking about periods, the reason we are all alive, be shameful? I just don't understand why as a society we have created this.

I started doing research about it again for this blog and I found some really interesting articles that speak about the lack of conversation around menopause.  One article from the UK said that women even shy away from talking about it with their doctor. To their doctor! The one person we should feel completely comfortable talking to. In fact, an AARP study found that 42% of women surveyed did not discuss menopause with their healthcare provider.

I went to my my well-woman exam on the anniversary of not having a period and I proudly told her I had reached the 12 month goal. The nurse looked at me enviously and said, "Wow! So lucky!" The funny thing is, that was it. She made note of it and there was no further discussion about it. I'm not going to lie, I was expecting a little more fanfare. Maybe a cake or balloons? She didn't ask me if I was experiencing side-effects, anxiety, memory loss, nothing... I'm the one that had to tell her that I felt my hair was thinning more than usual and she prescribed a scoop of collagen powder in my coffee every day. It's good for bone density too!

While doing research about why women don't talk about menopause I came across a great article in the Harvard Business Review, "It's Time to Start Talking About Menopause at Work." The article makes such a great point. It says that "menopause often intersects with a critical career stage." Most significantly it occurs at the time of a woman's life when she is most likely moving into a leadership position. The article points out that one of the reasons women don't want to discuss what they are experiencing is because of "ageism." In fact, this is the reason they should be talking about it. We should be helping women work through this difficult time so they can continue to be productive members of the organization.

When I read about the anxiety, memory loss, fatigue, and depression caused by menopause, I immediately thought about how organizations are preaching about DEI awareness. If corporations and organizations are serious about DEI, ageism needs to be at the top of the list, next to sexism. This is a real issue that affects millions of women every year, possibly 50 million women in the U.S. in 2020.  As Jeneva Patterson points out in the her Harvard Business Review article, "We are learning to discuss race, gender, and generational differences more openly at work and we need to put menopause on the agenda."

The sad part is that there is so much misinformation about menopause. Diane Danzebrink in the UK has made it her mission to "normalize the conversation about a phase of life that every woman will experience at some point." She launched the #makemenopausematter campaign to provide menopause education in the workplace and for menopause to be taught in relationship and sex education classes in schools.

This is a great start, but European countries are often ahead of the U.S. in discussing human sexuality. We need these same kind of movements in the U.S. We need for menopause to become part of the conversation in the OBGYN office, in the workplace, in the press, and online.

We need to normalize conversations about reproduction, the fact that periods lead to all of us being alive, and that there is an end to this cycle in life. Women should not feel ashamed to talk openly about menopause and they shouldn't feel ashamed or feel "old" because of menopause. We all need to be talking about it, in our homes, in the media and in the workplace.

Posted by ShoeGirl Corner at 10:24 PM No comments: