How the Peloton Bike is Changing My Life

Almost two months ago I made the best drunken purchase I've ever made. It's one thing to buy too much silver in Mexico while drinking and shopping. It's another thing when you've had a few too many drinks and you're home and targeted for the 100th time with a Peloton bike ad. There's a billboard by my house, I received a direct mail postcard, saw digital ads, my boss has one, and finally I was served up a TV ad while watching Hulu. I clicked through to the ad and they had a very good call to action: (this is so the advertising person talking here) Zero down and ZERO INTEREST. That caught my attention and this ended up happening. I blogged about it and how it had become the catalayst for me to get stuff done. 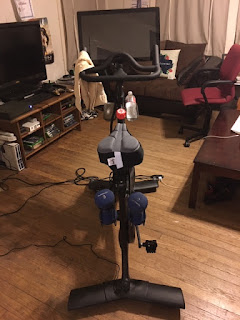 I'm coming up on my two month anniversary and I'm taking my body measurements again at that time, although people are constantly asking me if I'm losing weight. Then there's social media of course. I'm posting photos about my work-outs, probably to the point of being obnoxious, and photos of my progress. Friends keep commenting that they can see the difference.

Side note to this. I like to think that I'm motivating people because I've had so many friends ask me about the bike and they are thinking about buying it. I had one friend who actually did buy it and Peloton sent me a gift card for referring her. I like what she said the best. She said that I'm a real person, not someone who was athletic and already active prior to this. I'm a busy working mom raising two teenagers, about 60 pounds overweight and I have to find the time to exercise. I like that my friends see me as a "real person" who they know, embarking on this exercise journey.

The thing is this. I have always exercised off and on for the better part of my life. I was on the swim team and track team, throwing the shot, in middle school and then I started doing aerobics every day after school in high school. I belonged to a gym in my early twenties and then later when I had kids I belonged to 24 Hour Fitness for a few years. I've gained weight and lost weight over the years, but I've mostly gained. Even after getting the lap band eleven years ago my weight is higher than it was at my lowest post-lap band weight. (Thank goodness I've never gotten up to my highest weight that I was at in 2007 before getting the lap band.)  I've started and stopped so many diets over the years. I've started and stopped exercising. I've tried running off and on, but never stuck to it.

The Peloton has been different. First of all I'm paying for it right now. Yes, I am financing the bike until I pay it off, so that's one payment. (no interest and no catches) The second payment is the subscription to the absolutely awesome program that I love. I see this like a gym membership. Not only do I follow live and on demand cycling classes on my bike, I can also do floor exercises from arms, to core, to yoga. The best part is that you can have up to five profiles on your subscription, so my two kids can use it too. So really I'm getting three gym memberships for the price of one subscription.

I downloaded the Peloton app to my phone and I can do any of the floor exercises using my phone. Today I went on a beginner walk/run using my app for the first time. I had a trainer in my ear the whole time leading the run.

Maybe I'm especially motivated right now because it's all so brand new and because I'm paying for it, but I'd like to think that this bike has changed the way I exercise. It sits in the middle of my living room and there's no avoiding it. I can jump on it whenever it's convenient and I don't have to get dressed up, except for wearing my padded shorts and cycling shoes. I can get on at 10 p.m. at night if I want to, cycle for half an hour, and then jump in the shower before bed.

It's not like any other stationary bike because of the classes and the instructors. So far Jess King is my favorite because she is so motivating. I did my first live class this weekend and I chose to do it with her. So far I had only done pre-recorded on demand classes and I was working my way up to a live class. I also like Jennifer Jacobs for the arms but I'm sure that as I do more classes I'll have more favorites. I must admit that watching the leaderboard when I was doing the live class was really motivating too. It shows you how you rank with all the other people doing the same class.

The Peloton bike is changing my life and reshaping my body and my mind in the process. I feel stronger than I have in a long time and like I can do so much more. I'm even more aware of what I'm putting in my body for fuel, rather than just eating for the pleasure of eating.

On today's run the instructor said something powerful. He said don't exercise because you "have to." Exercise because you can. You GET TO exercise because you have that privilege. I don't live in a war torn country where we have to stay inside. I have legs that allow me to cycle and run and there are people who wish they could. So I get to exercise and I don't take that for granted. This will be an exciting journey and I can't wait to update you all on the progress. (Not a sponsored post.)
Posted by ShoeGirl Corner at 3:46 PM No comments:

Building My Own Personal Brand as a Writer

I've been blogging here since November of 2004 when my youngest was seven months old. So much has happened to me since then. I started the blog as a writing outlet and somewhere to be an accountable for my writing. My goal then was to get my novel written and I talk about it in that first post.  I did get my novel written, and even edited a few years ago, but in the almost 14 years since I started this blog not much has happened with the novel. But a lot has happened with me and this blog became the  chronicle of my life.

The reason I'm going down memory lane like this is because for a long time now I've been beating myself up about this blog. I beat myself up when I don't write often enough. I beat myself up when I forget to promote it. I beat myself up because it doesn't have one set theme. For a while I was told that I had to have one main subject, like shoes or make-up or one of those other subjects that people blog about and make money selling ads or getting sponsorships. I stressed because I never took the blog to the next level, I never put it on it's own website. I own the name shoegirlcorner.com but it redirects to Blogger.  I finally got over all of that. I had an AHA! moment.

Last Friday I attended Houston Social Media Breakfast, a monthly breakfast that always discusses a a different social media topic. I learn so much at these breakfasts and it's a great place to network. The speaker was Mila Clarke Buckley, AKA "Hangry Woman." and she said so many things that resonated with me. The topic was "When Building Your Personal Brand Isn't Your Day Job."

So to keep it short and sweet these were my main takeaways and part of my AHA! moment.

Instagram is all about these 30 hashtags and if you have good hashtags you can gain more followers. So I came up with these 30+ hashtags that may change from time to time, depending on my post. (Instagram only allows 30 hashtags.) Why are these hashtags important? Because these are the topics  I write about on my blog and when people see them on Instagram, and they are something they are interested in too, they are more likely to follow me and get to know me as a writer.

And most importantly I finally came to terms with my blog being about all these things. It just is. This blog is all about my life and the many things that make me who I am. So I may blog about getting a Peloton, about gratitude, old architecture, being a single mom and so many other topics. The goal of my blog and of building my personal brand is to build a following and readers, not to sell advertising or sponsorships or to promote a brand. So when I finally publish my book I'll have a community of people who will want to read my books.

It's that simple and it goes back to the original reason I started this blog. It was to help me write my novel and to keep me accountable. Technology has changed a lot in the past 14 years since I started this blog and social media has been a big part of that. So it's only natural that my blog has had to change too. I'll probably only blog once a month and I'm okay with that. As long as I keep promoting myself and my writing on Instagram, Facebook and Twitter it's all good. Follow me and read my book!
Posted by ShoeGirl Corner at 6:44 AM No comments: