Skating and All Kinds of Crazy

I've been thinking a lot about craziness and specifically the crazy in my life. I blogged about it over on my skirt! blog when I talked about Emma on Glee, my new favorite show and my new favorite girl crush. I figured out that what fuels my girl crushes is the clothes. I am in love with Emma's wardrobe the way I was in love with Carrie Bradshaw's.

I want her clothes! I realize that I can't have the real ones, but I can always search for similar outifits. This website that I found will make it easier! If nothing else I can always mimic the look with other similar pieces. I love the way she wears very bright colors and mixes two colors you wouldn't expect together. 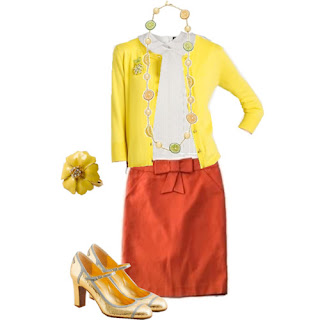 Outfit from http://www.wwepw.com/
On another crazy note, I took up skating again! Yes, like the old fashioned four wheel roller skating. My first day out, last Tuesday was very strange. I expected to just go out there and to start skating like before. Forget that it had been about twenty years since the last time I really went roller skating. I was actually shocked when I couldn't. I refused to believe it.

I even posted about it on Facebook.  "I refuse to believe that I don't remember how to skate any more!" I know that sounds crazy and unrealistic, but I guess I thought it was like riding a bike. I thought I could jump right into it again. Wrong. I had to take it very slow at first.
The second time out I did a lot better. I told myself to let go of the fear. It was the fear that was holding me back. At the same time I couldn't get too confident because I didn't want to fall. I had to strike a delicate balance between those two.

I headed off the sidewalk next to my house and on to the street and I found that I could skate. The sidewalk is built in sections and each block is separated by a little wooden line or ridge, so it was actually harder to skate there, because my skates would hit the ridge and slow me down or I'd lose my flow and then my balance. When I got out on the street it was a lot smoother. It was such a great feeling to remember how to skate with the wind in my hair.

When I first posted that I had to let go of the fear in order to skate a friend of mine reminded me that she never learned to skate after she fell when we were kids and broke her wrist. I pondered on that. I also fell and broke my arm skating when I was in first grade. Yet I never let that hold me back from getting back on skates and learning.

Skating is a lot like life. I know the falling down and getting up cliche has been used so many times, but I as I thought about it, I realized that I really have had that "when you fall down, get up and keep going" attitude since I was a kid. I fell down and broke my arm, but I didn't let that scare me. I went right back to roller skating. And my parents never told me not to either. I don't remember them ever telling me that I shouldn't skate again because I had broken my arm. It was just considered part of the deal, part of life.

I feel that way now with my own kids and with me. I'm scared when I watch them skate, but I know that I can't be. This is part of letting go and letting them fly. They are wearing their helmets and pads, not like when we were kids, so I've protected them as best I can. Actually I can't wait for them to be ready so I can take them to the park where we can skate faster and better than we can on the sidewalk next to our house or on the rough street.

I want to be active so that I'm a good example. I love going to they gym while they are taken care of in the Kids' Club, but when I really thought about it, they aren't getting the same physcial exercise that I am when we're there. I want to be out there with them, showing them that I can skate or run with them too. Hopefully when this summer is all said and done I'll look even better in my new Emma Pillsbury look.
Posted by ShoeGirl Corner at 11:23 PM No comments:

I Will Eventually Blog Again

I haven't had the time, energy, or desire to blog in a while. I can't get any words out. I will blog again one day soon. I just need to find my words again after the storm has passed.

Posted by ShoeGirl Corner at 1:18 AM No comments: