I Feel Pretty and My ADD Self-Confidence

I just came back from a 4 day trip to Paris on Tuesday. Yes, I know, that in itself is a whole other blog on its own. I'll be writing one about my favorite travel tips next. This blog is about the two movies that I watched on my flight home- "I Feel Pretty" and "Book Club." These are two totally different movies but they both deal with one similar theme, a woman's self esteem, whether she's single and in her 30s or a 65+ empty-nester. Even a federal judge, played by Candice Bergen in "Book Club," can feel insecure and unattractive sometimes. (Small "I Feel Pretty" spoilers.) 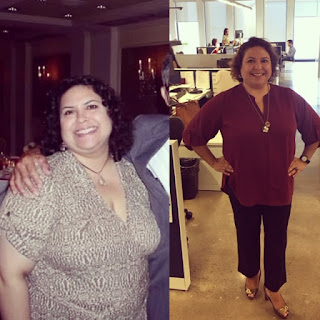 Me at my biggest in 2006 on the left and recently this year on the right.

The truth is we are all our worst critic. I think that’s what “I Feel Pretty” was about. Amy Schumer’s character is her worst critic and when she hits her head she gets this total self-confidence. The interesting thing is that we never see what she sees in the mirror. We all assume she sees a super fit woman from the things that she says, but unlike other movies that play with this theme, they don’t show her point of view. Which really emphasizes the fact that we all have our own idea of what the ideal woman looks like in our head.

What I loved about the movie was the message that if we just love ourselves and have self-confidence we can achieve so much more. Unfortunately, the character does become a bit obnoxious and full of herself, so I think there was a message there too. Despite it getting a little corny and Amy Schumer exaggerating things a bit, for the sake of comedy, I loved the over-all message of believing in yourself and that realization that she had that self-confidence all along. We all do!

When I recently posted this old photo on Facebook my sister said she didn't even remember me that size on the left. I do remember being this size and I remember thinking that I needed to lose weight. However, I don’t think I realized how I looked in that dress. I look at this picture now and I think I look self-confident and like I don't seem to care that you can see the outline of my stomach or that it does nothing to camouflage the size of my boobs. I know I did have some feelings of insecurity sometimes, like anybody else, but I don’t think it was that bad. For god’s sake look at that dress I’m wearing!


I remember a friend telling me one day when I was talking about my weight, around this same time period, that she didn’t think that my weight bothered me because I didn’t act like it did. I probably just hid it very well or forgot that it bothered me. Sometimes I'm ADD like that! Seriously though, I know that part of the reason I made a drastic change in my life to lose weight was for appearances. I did have times that I looked in the mirror and wished I looked different but part of me hated conforming to society's idea of what we should look like.  However the most important reason I did it was for my health. That's not to say I don't still struggle with my weight daily. A lap band is not the end all cure all. All it does is keep me from weighing 300 pounds and having diabetic complications.

As I've written here lately, I've recently been working out a lot more and I've been doing the Peloton bike. I know I've lost weight, the scale tells me and my clothes tell me I have. But when I look at pictures that were taken of me recently by other people, and standing next to thin fit people, I think I look sooo fat. When I was recently traveling I was sitting up high on a bar stool at the airport and I looked over at my reflection in the window and thought I looked huge.

The funny part is that when I see these images of myself I think, "That's not how I see myself in my head!"  I remember thinking that same thing ten years ago when I initially started losing weight and I saw a picture of myself and it actually discouraged me. I remember thinking, "If I still look that big after losing thirty pounds, what did I look like before?" I thought the same thing this time. As funny as it sounds it's like I struggle between feeling self-confident and good about myself and then seeing pictures of myself and getting knocked down a notch.

Then on the flight back from Paris I saw "I Look Pretty." I know, I know! It shouldn't take a movie to tell me what I already know. All I'm saying is that I'm not letting my own insecurity discourage me this time. I need to remember that self-confidence of the woman in the photo above, yeah the one of the left. She don't give no Fs what she looks like in that close-fitting dress.

I write so candidly about all this- about my body issues, my insecurities, my thinking I look good and then not- because I know that there are a lot of people out there that can relate. I hope that my writing about it makes it real and okay to feel that way. I hope it makes someone feel better about themselves and to realize that like Amy Schumer's character Renee, we do have that self-confidence inside of us all the time.

(This blog became all about "I Look Pretty," so I didn't get to talk about "Book Club." It's a great movie about growing older and not losing our sexuality after 65. It gave me hope for the future as I'm getting older and closer to becoming an empty-nester. I want to have the self-confidence of Jane Fonda's character when I'm 80! Hell! I want that self-confidence now.)
Posted by ShoeGirl Corner at 10:45 AM 2 comments: