The Quest for Hamilton Vanguard

As the 2014-2015 school year came to an end each child was accepted into a Magnet program/school and I thought we were done. Miranda was accepted into DeBakey, the High School of Health Professions and Seth was accepted into the STEM program at Hogg Middle School. However, Seth was not completely happy with that and he asked that I still try to get him into Hamilton. I spoke to the Vanguard Coordinator and found out that there is a Phase 2 application process. 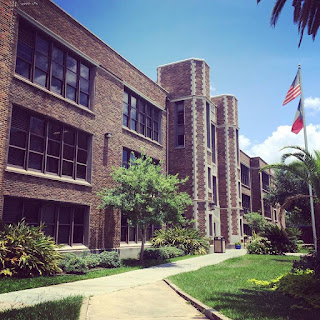 This is how that works for you parents out there wondering about this. If you applied to Vanguard and your child didn’t get accepted based on his last year test scores or testing you can reapply in the summer. Let me use Seth as the example so you understand exactly what I mean because when I say “last year” it can be confusing.

So when we applied to Vanguard for 6th grade this past school year, Seth was in the 5th grade. The application asked for his test scores from his 4th grade year. Seth didn’t have the best year that year but his 5th grade teacher wrote him a great recommendation and I had high hopes. We also applied to magnet school programs. When we received the results he had been accepted into two magnet programs but not into the Vanguard program at Lanier, where I initially applied.

Important lesson to note here. Now that the application is done online you MUST apply to every Vanguard school you are interested in attending, not just one. In the past it was only one application and you chose the three schools you wanted in order. This year it was different because it was online. I didn’t know that and I applied to Hamilton late.

However, since he didn’t qualify for Vanguard all together he still wasn’t accepted into Hamilton. So the Vanguard coordinator told me this. You can reapply this summer with his last report card of 5th grade and his Iowa test scores from 5th grade. It took FOREVER for them to send us the Iowa test scores but last week they made them available and I dropped off a copy of Seth’s report card. I was thrilled when I received the news that he had been accepted to Hamilton into the Vanguard program.

I think this is important to know because there are so many parents out there that have no idea that they can still apply to the Vanguard program or Magnet schools, that still have space available, as late as the summer. It was a learning experience for us too and I thought I knew everything there was to know about applying to Magnet and Vanguard schools, but everything is a learning experience.

Hard to believe that this fall I’ll be the mom of a high school and middle school student! I have to cherish these next 4 years because in 3 years we’ll be dealing with college applications and more.
In additional good news, Miranda was invited to go back to Kinkaid next summer so I have 4 busy years ahead of me, between high school, middle school for Seth and summer programs for Miranda at Kinkaid. Hopefully Seth can also attend Kinkaid and his first summer will be Miranda’s last summer in the program.
I don’t even want to think that far ahead. I want them to stay exactly the same age they are right now. They aren’t babies any more but they are still young kids. In four years all of that is going to change.
﻿
Posted by ShoeGirl Corner at 5:50 PM 1 comment:

The first thing that attracted me to Gwendolyn Zepeda’s first published book was the hilarious title, To The Last Man I Slept With and All the Jerks Just Like Him. (Houston: Arte Publico Press, 2004) It’s a great collection of short stories that are candid and comical observations on life.

I’ve always loved the titles of her books. When she was recently named Poet Laureate for the City of Houston she published Falling in Love with Fellow Prisoners, (Houston: Arte Publico Press, 2013) another great title. In her second book of poetry, Monsters, Zombies + Addicts (Houston: Arte Publico Press, 2015) Zepeda has written an exceptional collection of musings about life in the big city. 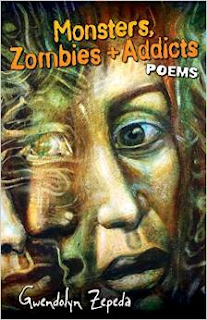 She writes about the mundane activities of life but adds an interesting point of view to things as common as going to the dentist in “New Teeth.” She shares her experiences as a working woman and the challenges we sometimes face with our identity as a woman in a male dominated profession. We also get to know more her Aunt Sylvia, whom Zepeda obviously loved very much.


The “Ringmaster’s Daughter” is written in a wonderful lyrical verse that is both intriguing and haunting. I had to read it a few times and it left me wondering who is the true Ringmaster of her poem. This was one of my top favorites.


Her “No Title” poem about the dog in a yard, dumb, drooling and flea bit, is a sad contemplation on life.  The last two lines evoke so many thoughts and feelings, “blocked by fences that nobody else can see.”  This reminded me of the saying that sometimes we are our own biggest obstacle.


Houston is a big city and a lot of things happen. We encounter so many different characters day to day and sad experiences. A few years ago a co-worker who worked in the office across the hall from me didn’t come to work. Later in the day his boss got a call from his wife that he had died. We learned that he’d taken his own life. “Sad Shock” reminded me of that experience and how we all felt that day and it made me wonder how many people have had a similar experience.


The book ends with “Aunt Sylvia’ almost as if Zepeda put it there as a tribute to her beloved aunt. It made me laugh out loud when I read it because I fondly remembered Westheimer near Montrose.


My daughter went to middle school down the street from that main drag area and I’ve told her, “Kids used to cruise this street on the weekends.” She looks around unimpressed, with no idea why we would have done that. Now trendy restaurants line the street right in that area where kids used to hang out of their cars having conversations with kids in other cars that passed them, blocking the street and slowing down traffic to a crawl. I think the city finally cracked down and prohibited that past time. It was the place to go and see “marvelous things” like Zepeda says. It was a rite of passage for many Houstonians in the 80s. It was part of our city's history.


That is why I love Monsters, Zombies + Addicts. It reminds me of Houston and all of our eclectic experiences, from going to the dentist, to our neighborhoods with flea bitten dogs, our work place where we struggle with our feminine identity and to the memories of growing up here. It covers all of this and more. I can't wait to see what else Zepeda has in store for us in her next book.

#sponsored
Posted by ShoeGirl Corner at 8:32 PM No comments: