I started 2020 off with a bang! I told my sister that I was so tired of saying, “It Could Have Been Worse,” but that is really the best description for this ordeal. 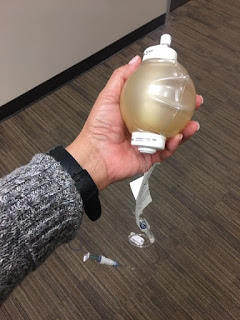 As my son Seth said a few weeks ago, before things did get worse, “It all started with a bone infection.” That is exactly right. It all started with a fungus in my right big toe nail specifically. But as a pharmacist told me, “A dog cannot become a cat.” Somewhere along the way an opening occurred in the toe nail and bacteria got in. That bacteria became an infection and that infection traveled down to the bone of my toe.

Although that alone sounds bad enough, it could have been worse, and technically it still could be worse. That bone infection is called Osteomyelitis and it can lead to damage to the bone and worse case, amputation. The podiatrist that I went to see didn’t see the infection on two x-rays taken four weeks apart. He decided to do an MRI on my toe and that’s where he was able to pinpoint the infection. I’ve been told several times that if he had found the infection on the x-ray it could possibly been too late. It could have been worse!

The podiatrist sent me to an infectious disease doctor. I thought I’d be on oral antibiotics for a few weeks. To my surprise it wasn’t going to be that simple. The doctor explained to me that the only way we could attack this infection was through intravenous antibiotics. And the only way to do this was for me to go into the hospital to have a picc line inserted into the big vein in my arm. PICC stands for a peripherally inserted central catheter. The catheter runs the antibiotics through that vein, right above my heart and straight into my blood stream so they can reach the far regions of my toe.

So on Thursday, January 9 I went into the hospital to have this PICC line inserted and to begin my three and a half week experience with Vancomycin, one of the strongest but most effective antibiotics for bone infections.

The doctor has a pharmacist on staff and a pharmacy in-house. The pharmacist compounds the medications and each week I had to go in to see the infusion nurse and the pharmacist. The nurse draws blood and changes the dressing around the picc line. The pharmacist would hand me 14 globes of medication that closely resembled a buzz ballz cocktail, a week’s supply. I was responsible for giving myself these antibiotics twice a day for two hours each time.

They check the blood each week for kidney and liver function. Each week I was told I was doing great. I was being very proactive and when I started this antibiotic treatment I had also decided to start a detox diet. I was drinking a probiotic each morning, drinking a body cleanse drink, drinking detox tea, kombucha and a ton of water.

I have no idea how I did it those first three weeks. Somehow I fit this picc line and these antibiotics into my daily routine. I would go to work each day, check in, go to a meeting or check email and respond to important items. Then I would go to the nursing mother’s room in one of the restrooms where they have a table and a chair. I would hook up my buzz ball, would put on an apron with a pocket for the ball, and then I’d throw a poncho over me to hide the whole thing. I’d go back to my desk to work until it was time to disconnect and clean the line with saline and heparin.

There were a couple of times that I connected or disconnected in my car. I’d infuse sometimes while driving and once even while having lunch with someone. The second infusion was always at home before bed. There were times when I fell asleep while infusing because I was so exhausted. In retrospect I was wearing myself down.

I was planning a big trip to Las Vegas for my 50th birthday the weekend of February 7th.  I really wanted for the doctor to tell me that I was getting all better by week three and that he could remove the picc line of February 6 so that I could go to Vegas without it.  At my January 30th appointment he told me that wasn’t going to happen. He told me that I needed to hold on for another two weeks. I cried but I accepted my fate and even joked that I was going to name my picc line Piper and that she was going on an adventure with me to Vegas.

Ironically at that visit he suggested that I change over from Vancomycin to Daptomycin, a different and stronger antibiotic. My response that sealed my fate, “Why change antibiotics when I’m doing so well with the one I’m on. What if I change at this late date and I have a reaction to the new one?”

Five days later I had a delayed allergic reaction to Vancomycin.

To be continued...
Posted by ShoeGirl Corner at 1:47 AM No comments: