I Lost My Dad in February

(I wrote this on March 19 and it's unfinished but I decided to go ahead and publish it. This is a first draft and un-edited. I just couldn't finish it....)

This is probably one of the hardest blog posts I've had to write in a long time or ever. I haven't been able to write it even though it's already been a month and a week since I lost my dad, Nicolas Casares. 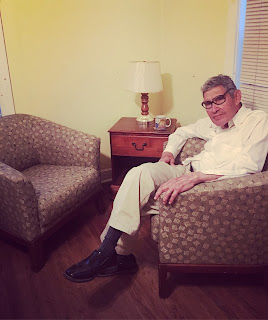 Daddy on the day I brought him some chairs & set up a sitting area for him.

January started off bad. I had a really bad cold that seemed more like the flu on January 3. The doctor couldn't diagnose it as the flu but she gave me antibiotics because I had a lot of congestion in my lungs. On January 10 I took my dad to the doctor and he was diagnosed with the flu. They x-rayed his his lungs and gave him an EKG and told me that everything was clear.

On January 30 I was back at the hospital with him because his cough wouldn't stop and he had a swollen arm. He had a blood clot in his arm and he had pneumonia.

On February 10 they told us there was nothing else they could do for him. They did an ultrasound to find out why he seemed to get better and then he'd get worse. It turned out that his epiglottis was broken. That's the little flap that closes when you swallow so food and liquid don't go to your lungs. They told us that on Wednesday the 14th he would have been on antibiotics for a full two weeks and they couldn't continue giving him antibiotics because other organs were breaking down. It was hard for us to accept, but in addition to this my father had a DNR (do not resuscitate order) that said he didn't want to prolong his life with any artificial means. A feeding tube or any of those kinds of things are considered in that category.

We came to terms with all of this from Feb 10-14. That Wednesday, Valentine's Day, they gave him his last antibiotics treatment. On Thursday, February 15 he was moved into the palliative care wing. By that day he couldn't speak at all any more.

I cherish the days in between January 30 and February 14 when he could still speak. One of the last times he spoke to me I asked him if I was getting on his nerves playing old Spanish music for him and he said no that in turn it made him happy. When he lived with me he would tell me how good my kids were. I asked him one day if I was doing a good job raising my children and he nodded.

He hung on from that Thursday until Sunday, February 18. We were there with him every day from that day on, playing music for him, singing to him, talking to him and trying to keep him comfortable. We asked them to give him morphine to ease the pain of the transition. We kissed him and told him what a good father he had been to all of us. I read him the Daily Text from his religion every day. As if my divine intervention, the texts had something that related to him each day.

The last time I saw him alive was Saturday, February 17. I had stayed in the hospital the night before and I didn't want to leave the kids alone again so I left late that night. The next morning my sister called me at 6:30 to tell me that he had passed. I debated whether to go to the hospital to see his body but in the end Miranda and I decided to go. I'm glad I did. I got to hear them play "Taps" and I watched them wheel his body down the hall and watched the military nurses salute him.

Posted by ShoeGirl Corner at 11:03 PM No comments: