It's been a while since I went a whole month without blogging but this was one of those times. My dad moved in with me on June 25. The summer has flown by! I've been working part-time at my new business, part-time with my kids and having my dad here. The summer didn't go exactly as planned but I'm grateful for the time I've had and the fact that I've been able to take this time off. 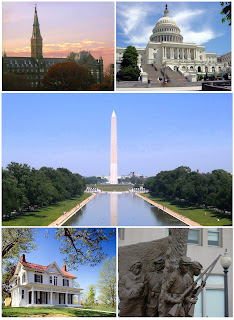 Photos of Washington DC courtesy of Creative Commons
Posted by ShoeGirl Corner at 10:19 PM No comments:

My Sex Education Through Literature

I've written many times about how much we read in my home, about my parents, censorship and how I'm glad my parents didn't censor our reading. I've also written about teaching my kids about the Birds and the Bees and trying to be open and frank with them about all things.

All of this reminded me of how, besides having older sisters and listening to them talk, books were my early sex education. Sure, I heard a lot from my sisters being the youngest. The eldest was already an OBGYN nurse by the time I was four. But there were also the magazines and the books.

It was the reading that taught me more, about the actions and the feelings involved. When I was younger my mom didn't mind me reading Victoria Holt novels. They were romantic but they never discussed sex in detail.. However when she saw me reading The Thorn Birds, when I was around ten, she raised her eyebrows. She had already read it by the time it made its way to me and she knew there were some sex scenes in it. I don't know if she just decided that I already knew about sex, or if she just figured it was part of growing up, but she didn't forbid me from reading the book. Of course I would have probably found a way to read it anyway.

In middle school I was introduced to Judy Blume, the author who introduced millions of girls to their sexuality. Her books were frank and truthful and I know many women feel this way about her. So much so that authors have written about the impact she had on their lives.  I bought a great book a couple of years ago, All I Needed to Know about Being a Girl I Learned from Judy Blume. What a great tribute to her as an author!

I think I read Forever when I was in 8th grade, right around the same time I read Wifey, Judy Blume's adult novel and Dean Koontz's Whispers. I remember we passed Wifey and Whispers around with dog eared pages for easy access to the sex scenes.

I'm sure what I read was tame compared to what else was out there. It's not like I was reading Henry Miller. I was reading the books my sisters read and the books passed around by fellow middle school girls.

My parents wanted to sit down to have "the talk" with me when I was around 11 and I remember telling them that I pretty much knew everything already from my sisters. I remember the look of relief on their faces. I wonder what they would have said if they had known how I had learned most of what I knew.

Maybe they wouldn't have been as liberal about letting me read whatever I wanted or they would have told my sisters to watch what they said in front of me or what they showed me.

Either way, they didn't and I did and I don't think it scarred me in any way. If anything I think I had a healthy, realistic point of view about what sex was and wasn't. I wasn't curious or tempted to try it, the way I wasn't tempted to try drugs. I think sometimes that everyone's open attitude about sex and nudity in my home didn't make it so taboo or mysterious. Kind of like how you hear about Europeans drinking at an early age because it was the norm and not going crazy when they turn 21 or go to college like American kids.

Reading may have shaped my attitude about future relationships and maybe even my personality. Whether it was right or wrong or too much information too soon, it was what I experienced and now as an adult I appreciate that and I embrace that it made me who I am. There is no shame in that.
Posted by ShoeGirl Corner at 6:30 PM 1 comment: