Waiting on Shoes and Rodeo Fashion

A month ago I announced that this would soon be turning into a true shoe blog. And by that I don't mean just blogs about the awesome Nike quotes and the ad copy writers who created that awesome ad campaign. Yes, you know the one. The one with all the awesome quotes for women, about women, about topics that women could totally connect with. Example: 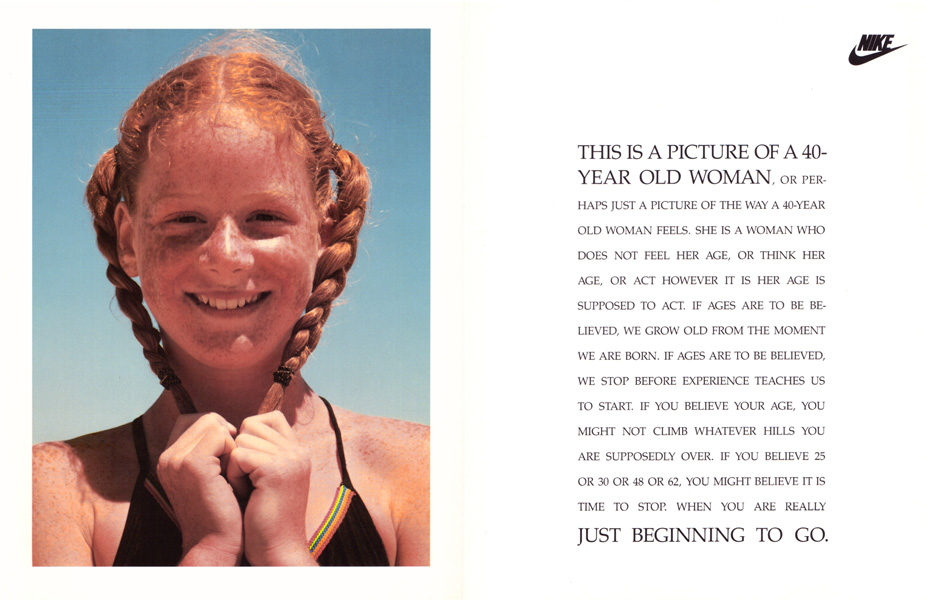 This is definitely one of my favorites. I still love this even though I'm past 40 now.
So my new blog will be ALL about shoes, even Nikes. I feel like I have a lot to say about shoes. I was a the Houston Livestock Show & Rodeo today and I was checking out all the different shoes people wear, especially the cowboy boots.
The two most popular styles at the Rodeo were: cowboy boots with short shorts, especially denim shorts and cowboy boots with little girly floral or eyelet lace dresses. These were all very cute combinations but am I weird because I found the very short denim shorts with cowboy boots combo inappropriate on little girls? Yeah, it kind of made me uncomfortable to see these little 8-10 year olds in very short denim shorts. Even my daughter said they looked "cute" but too grown up.
To give you an update on what is going on with my blog. I'm just waiting on some technical details to get worked out. As soon as all that is worked out I should start my new and improved Shoegirl Corner blog. Hope to see you there.
I hope to be in business very soon. So tell me, short shorts on little girls with cowboy boots? Am I being overly conservative? Sometimes it does come out in me.
Posted by ShoeGirl Corner at 12:31 AM No comments:

On Why I Totally Get Lena Dunham

Lena Dunham's character Hannah on "Girls" reminds me of America Ferrera's character Ana on "Real Women Have Curves." Her body is a response to society's message to women, especially young women, that you have to have a tiny thin body to be accepted as beautiful. 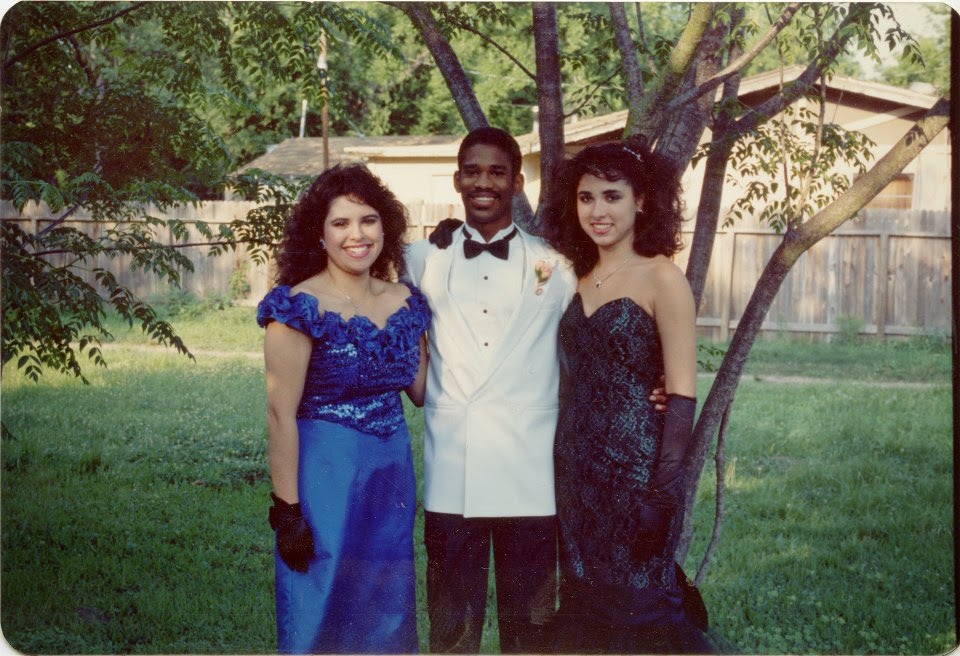 (Me at 18 going to my prom with my childhood friends. I thought I was so fat.
I wish I weighed that much now)

I've quoted Ana from "Real Women Have Curves" in past blogs because I can really relate to her character. At the end of the movie Ana takes off all her clothes and stands in front of her mother in her bra and panties and says, “Mama, I do want to lose weight but part of me doesn’t, because my weight says to everybody, ‘Fuck you!’ How dare anyone tell me what I should look like or how I should be, when there’s so much more to me than just my weight?”

I love that part but it takes Ana to the very end of the movie to do that and to really speak up about her mother's criticism of her body. Lena Dunham does that with her character in her show GIRLS almost every single week.

I picked up the April issue of Glamour because Dunham was on the cover. I had already seen the fabulous pictures (untouched or not) of her in Vogue. The photos in Glamour are so beautiful too and the interview with Sheila Heti is great!

I think that this was Dunham's best response to the questions about her "nakedness." She said, "As teenagers our bodies become a signal of how good we are or how much worth we have.....To make my body a prop in my work gave it a value I didn't feel it had before. Life's too short for me to explain why it's OK for me to be naked on the show."

That's it. Period. She has used her body as a prop in her work and has given it value.

I have never made my struggle with weight and with my body size a secret. It's been my life-time struggle. Now that I'm older I'm worried even more about my health and even less about my vanity but I must admit there is a little bit of vanity involved. I can really connect to what Lena Dunham says. I was that teenager who thought she was too fat because she wasn't as thin as her friends. I can also understand Ana's character in "Real Women Have Curves" because for a long time I felt that way. I refused to conform to how society thought I should look rather than to accept me for my mind.

But oh how I wish I could go back to my 18 year old self in the picture above and I would have told myself, "You are just fine the way you are. Love yourself for your health and stay this size, but you ARE NOT fat! You are worth so much more."

I have had my ups and downs on being comfortable with my body and with my nudity as I've gotten older. I still have a problem being completely naked in front of someone. I have been known to wear a tank top to hide my middle section. I do wear a bathing suit with a little skirt, but the way I see it at least I wear a bathing suit. I know people who have missed out on the joy of being on a beach in a bathing suit just because they are worried about what other people think of them.

Life is too short! I always remember the topless old ladies in Europe. They didn't need a Lena Dunham to tell them it was okay to love their body. They were happy with themselves and with their life.

So this weekend when I'm on the beach for Spring Break I will be comfortable in my own body and in my bathing suit. I'll walk on the beach with my kids and I'll OWN IT! My body has value! It's mine.
Posted by ShoeGirl Corner at 2:39 PM No comments:

Crack In My Skull and Other Adventures

A few years ago I met a woman from Spain who studied Phrenology or Craniology. I never knew which one exactly. All I know is that she ran her fingers over my skull and she was supposed to learn something about my health. I don't remember anything that she told me except one thing. She ran her fingers over the dent my forehead and asked me about it. I personally had never noticed the dent until I got married and my husband pointed it out. He would always tease me and tell me I had a crack in my skull. 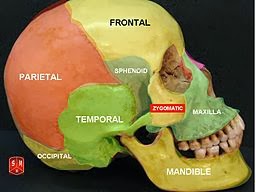 I told her I didn't know why I had it but that my husband had noticed it. She told me that it was a scar from the forceps when I was born. My older sister was there too and she confirmed that forceps had been used on me because I had the umbilical chord wrapped around my neck. I knew the umbilical chord story but not about the forceps. It was weird to find that out at almost 30 (or maybe I was older) that this was in fact a scar from what must have been a traumatic birth..

It made me wonder about how many things I won't know because my mother died when I was 30. I still had so many questions about so many things. The same way her mother died without telling her who people were in the many pictures that she inherited. Now my sister has those pictures all stacked in boxes and she doesn't really care about them. She's had them in boxes since she got them from my mother's house 14 years ago.

If she dies I fear that we won't ever get those family pictures back. At least not my sister and I who have children and specifically daughters who would care about our family pictures.

Life is weird. I'm not surprised that my father ended up with me in the last years of his life and I really shouldn't be surprised that I ended up being the main one to care for him. I'm not surprised that he's here because when I think about it he's lived with me the second longest time in his life. As odd as that sounds think about it. I lived with him 27 years before I got married, a year after I was married we lived in my back apartment, two years after my mother died we lived with him again to transition him to living alone. All this equals 30 years! He lived with my mom 53 years and 30 years with me. He only lived with his parents and family around 23 years.

So that means he's lived with me the second longest. Of course he's more accustomed to me and more comfortable with me. And honestly, he never had a great relationship with my 2 older sisters. He's always gotten along better with me and my sister who lives in California. California being the operative word here. She doesn't live in Houston so the person who gets to take care of him daily is me.

Thank goodness my sister cares enough about him and that she works for American Airlines that she can come to Houston when I need her to help care for my dad, which she's doing this week. Not everyone who has a sibling living in another state can say that.

Next weekend is the beginning of Spring Break. I'm taking the kids to our usual Surfside hotel on the beach. My sister is coming to stay with my dad so we can do this.

My daughter is inviting a couple of her friends and they're having a sleep over in the room next to ours the first night. It may be too cool to get in the water but we will have a great time sitting on the beach and sipping drinks. It will be a nice little vacation.
Posted by ShoeGirl Corner at 5:30 PM 1 comment:

I went by CVS yesterday morning so I picked up a small bottle of the Big Sexy Hair dry shampoo to try it. I love their hairsprays but I'm sad to say their dry shampoo not so much. My hair felt heavy with product and dirty. I didn't experience that with Batiste or with the Got 2b Rockin It dry shampoo. 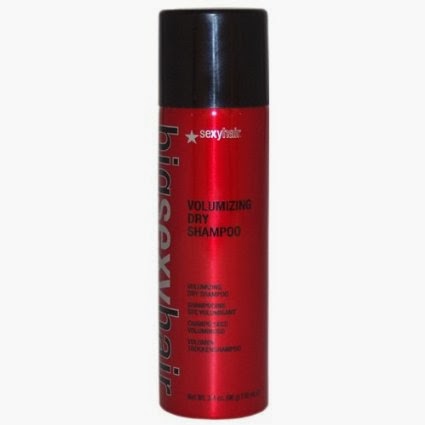 More about this product at Sexy Hair.
Posted by ShoeGirl Corner at 11:57 AM No comments: