My dad is 88 and all the funny and eccentric that you would expect from someone who has lived as long as he has. I guess he's earned that right when he's only 12 years from 100. 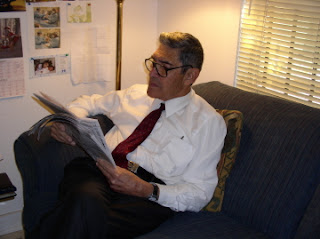 I love this picture I took of him reading his Houston Chronicle, like he has all my life. Next to him on the wall is my son's birth announcement right below some gory pictures of one of my kids coming out of my stomach. I love the way he just has them pinned on the wall for any visitor to admirer. Thanks Daddy! 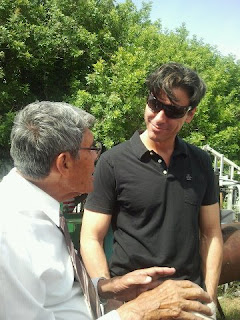 I just sent this picture to my cousin recently. I knew he would love it. Even though you can't see all of my father's face it captures his mannerisms so well. This is my dad telling a story, with his hands out. I totally get my talking with my hands from him. He is so animated when he's telling a story, one of the reasons we have always loved hearing him. And I love the look on my cousin Oscar's face and how he's smiling at my dad, so obviously loving whatever he is hearing and just being with my dad and being able to enjoy still having him with us.

My dad turned 88 in March. We just went to our family reunion around 3 weeks ago. (That's where the picture above was taken.) We hadn't had one in over 30 years and he didn't get to go to the last one, when several of his brothers were alive. This reunion was especially special because my dad was there and he was the only original child of my grandfather and grandmother who could make it. I have one uncle left, but he's 93 and in a nursing home in California.

Yesterday my dad woke up feeling short of breath and like something was sitting on his chest. My sister took him to the hospital. They admitted him and decided to keep him overnight because his heart was accelerated. I went by to see him last night and my sister went to pick him up today. Instead she called to tell me that they couldn't get his heart regulated so they are keeping him another day.

Yes, I"m scared. He's 88, he already has a pacemaker, and if his heart is accelerated that isn't good. It shouldn't be doing that. All I can do is try to be positive, hope for the best, and appreciate the time I have with him.
Posted by ShoeGirl Corner at 9:15 PM No comments:

Labels: Daddy, enjoying your dad while you can, Nicolas Casares, Oscar Casares, Thoughts of daddy

A Weekend of Reflection

This was a very significant weekend for me. It was a turning point in so many areas, but mainly in the area of making my own decisions and moving on with my life post-divorce. 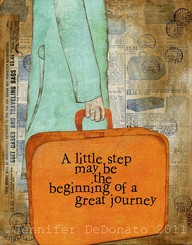 Sometimes it's scary making decisions that you know others won't agree with. Sometimes it's scary speaking up and telling others that you don't agree with their idea of how you should live your life. It's also scary letting others into your personal space.  I know this and more. It's all part of moving on with my life and getting it back in order.

As many of you know I'm not going to BS you, most of the time :), and I'm pretty much an open book. I am very open about my hatred for cleaning and housework. Well, this week I completed my goal of getting all main rooms clean. I have even kept them clean for one whole week. I see this as my post-divorce clean-up. Yes, 9 months later, but a clean-up none-the-less.

Now it's time to start on the biggest post-divorce project of all- my bedroom. I'm calling it "Project Mayhem." I know the definition of mayhem is "Infliction of violent injury on a person or thing; wanton destruction." Well that's what has happened to my bedroom since my divorce. It has become the dumping ground for everything in the house. It has been violently destroyed over the past year and it's not a place of refuge or escape. I feel like I am restoring my bedroom and nursing it back from mayhem.

So this week I move on to the second part of my project and my strategy of taking on this housework piecemeal. I need to do it this way so that I won't lose my mind and become overwhelmed. It's the only way that I can do housework.

Baby steps!
Posted by ShoeGirl Corner at 1:32 PM No comments: