I keep reading all these articles and blogs about not making New Year’s Resolutions. A couple of them even had a list of all the things that the author said she wouldn't do, including NOT losing weight.

The funny thing is that I can’t do that. I can’t just say, “I’m just going to eat whatever I want and not care about gaining weight!” Because guess what? I WILL gain 30 pounds instead of losing them. For sure. 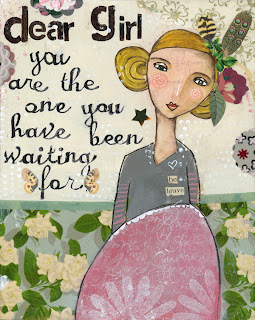 
But on a serious note about resolutions, I want to be enough for myself. I want to do the things that are good for me, including eating right and exercising, even if I don't list that as a resolution.
I want to be the girl I have been waiting for, like Kelly Rae Roberts says in the print above. Or in the words of Gwen Zepeda, "I've finally captured the girl I deserve." I really believe it. I know that I am enough.
I recapped 2013 in my last blog and I said that in 2014 I want to make my business work. The truth is, I’ve really been thinking about this a lot and I decided for sure. I don’t want to go back to Corporate America. It's a "revolution" like the little boy says in the AT and T commercial. A resolution revolution that I want to be my own boss.
I am more passionate about running my own business and writing than I am about working for someone else again. So in order to do these two things I am going to make all the necessary sacrifices to make it happen. I know I've been working on this already but part of me also feels like most of the last seven months were more of a vacation. At least the first four months were.

But now if I want to make this business work I need to hire an intern and an assistant.  I need to take all the steps to set this up and run it like a real business.
I am determined.
Some other blogs and articles I saw in December discussed thinking of a Word or even three words for 2014 in lieu of resolutions. I had forgotten about this idea and then on Friday I was reminded about it twice.
I saw it written on my December page of my day planner (yes, I still use a real paper planner), "What is my word for 2014?" I asked myself.  I saw that and said, "Oh yeah!"
Then later that evening I was having a drink with a girlfriend and she brought up the same thing. She told me her word for 2013 and her three words for 2014, which got me to thinking about it too.

I haven't decided on my three words yet. I want to really give them some thought, so I'll get back to you on that.
On one final note, Friday, January 3 was the 14 year anniversary of the last day I saw my mom and talked to her. I knew that my mom was sick and that I could lose her at any time but I still didn't know when. I didn't know that THAT was the exact final day. I wonder what I would have done differently. I wonder what else I could have said to her. Did she know that I loved her? No doubt in my mind she did and that makes it a little better.
Think about that when you say goodbye to your loved one next time, especially your parents. Every day treat them like it may be the last time you see them and tell them how much you love them. Even though I know she knew I loved her I would have told her one more time when I left her house that evening.
Posted by ShoeGirl Corner at 1:21 AM