End of the Year Recap

I did a pretty thorough recap of the year on skirt.com, so I thought I’d do the same for Shoegirl Corner, since this is my original blog and my baby. One day soon I will start my own website away from blogger, ShoegirlCorner.com. I’ve owned the rights to that name for a while, but I’d like to take a website building class so I can work on my site myself. 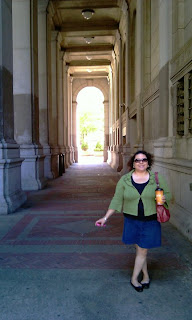 The year started out slow on ShoeGirl Corner since I was still blogging for Hips ‘n Salsa. It was a good effort, but not successful. I didn’t blog at all in January and then blogged on average once a month, but at the end of March I thought I could pull off three blogs. I started blogging more through April. I blogged about: getting my first mammogram, purchasing shoes and art, lost remotes and the differences between men and women.


The summer wore on and I realized that I was in a funk. I blogged about it more than once on Shoegirl Corner and on skirt. Now that I look back at both blogs I realize what a bad year 2010 was for me- personally, professionally, financially, and writing wise. The only good part of the year was that I kept writing and the health of my family. I feel like I spent most of 2010 reminding myself that things weren’t that bad and that they could be worse. I taught my daughter to tell me what my husband tells me, “At least we have the money to pay for it” rather than to lament that we didn’t have any money.


Some time in April people started commenting on my blog in Chinese. I reasoned that they were either Chinese spies or they were people who were trying to communicate with one another in communist China and they were using my blog as a channel. They only stayed for a few months and they either found a better channel or they were discovered and had to leave my blog. I was sad to see them go.

As the year wore on I gained more weight and I realized that I have food and cupcake issues. Okay, I rediscovered this. I finally set some goals for myself and I shared my vision board on my Shoegirl Corner blog too. I shared my goals with the world to help me become more accountable.

At the end of the year I feel like things started to take a turn for the better. I went to my beloved New York for business and stayed over the weekend and did some things I didn't do last time, like walking across the Brooklyn Bridge and going to Coney Island.

I started working out on a regular basis. I’ve gone ten weeks straight working out on average three times a week, sometimes more, until I had surgery on the last week of the year. I’ve worked out many times before off and on but this is the first time I think I worked out so many times consecutively. It was a turning point for me. What made it even easier to do was that Rey has been working out too. He has been so happy with his results that he decided to start training for a triathlon. Having him work on a goal to get healthy too has made it a lifestyle for me instead of a chore.

I feel like I ended the year on a good note. I even got a Kindle for $6 and now I can have the experience of reading books electronically first hand. I think that’s important if I’m really going to publish my novel electronically in 2011. I had surgery to correct a little feminine issue that I had and hopefully that’s all fixed now.
I’m looking forward to 2011 whatever it may bring in. I say, "Bring It!" It can not be worse than 2010. Anything that happens will be for the best. I need to get out of my comfort zone. I need to shake things up a bit.
I learned an important lesson this year and that was that it is important to write down my goals. (something I already knew but didn't do for some reason) I will work on spiritual, personal, family and on my writing goals in 2011- all the things on my Vision Board. See you all around next year!
Posted by ShoeGirl Corner at 6:16 PM

OMG, ShoeGirl, I feel like you just recapped a lot of my life too! I also own rights to my own website, but need to take a class to learn how to work it, got a Kindle (though not for $6), didn't blog enough last year (didn't write enough at all,frankly), and have 'Cupcake' issues (seriously, discovered Sprinkles and Crave and wish I hadn't!). I've set some weight goals, some writing goals, some financial goals and, though I don't have a Vision Board, have been thinking about making one....though I've been thinking about this for a year. HaHA! Am enjoying your blog!