I've been stressed. Like really stressed or as I like to say, "EXTRA stressed." I'm not going to lie, that damn City of Houston violation has been a big part of it. Of course it couldn't have come at a worse time. Back to School is always stressful for me. This year I opted out of school shopping and I ordered everything online. SO MUCH easier! But an expense none-the-less and I also had to pay someone to cut the grass and weeds in my ditch. I have to pay him to do some other things in the yard later this week too. 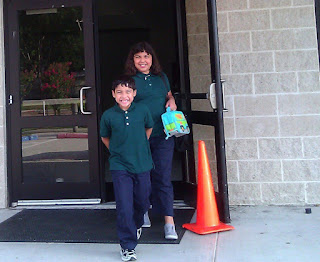 The Kids in 5th and 2nd Grade at Oak Forest Elementary

It's hard to believe that the kids are going to be a freshman and a senior at DeBakey HS this year. They were just in elementary school. Miranda was in her last year of elementary in this picture and now she's going to her last year of high school! I was just doing all the applications for Vanguard for them and now here they are, they are almost done. Four years of school left for Seth and one for Miranda. Now it's time for college applications.

This past week was extra stressful with all the things that have to get done before they start school. They had to go pick up their laptops and of course on different days, Seth on Tuesday and Miranda on Friday. They had their yearly physicals and Miranda had her doctor's visit, follow up to her surgery. She's all clear! Seth wasn't as lucky. We have to have some follow up x-rays for something they saw in his back.

Add on top of all the things that I had to do that my lap band is not adjusting well to a small fill that I had on the 16th. I hadn't had a fill in almost a year and I thought that I needed one so I went in. Apparently my body/stomach didn't think I needed one. It's been rejecting food, even liquid. It's been very frustrating and I can't see the nurse to fix it until mid week. So meanwhile I'll starve and take advantage of it for a weight loss boost. I hadn't even been feeling well enough to do the Peloton the last couple of days, but I felt better today and I did 50 minutes. It felt good!

So sometimes we just have to calm the F down and we make the best of a situation. There is nothing I can do about all the things coming at me at one time. Like the old grandma says in the movie "Parenthood," life is either a roller coaster or a merry-go-round. I'd rather have the roller coaster so I can learn patience and resilience. I think...
Posted by ShoeGirl Corner at 3:47 PM