I Think the Universe is Trying to Send Me a Message

I have been on fire for a solid week now. I cleaned my house and I've kept it clean. I've been riding my Peloton bike. I started cleaning out and packing up my dad's things and I'm almost done. I've even cut my yard a couple of times, post injury.

I just cut my yard on Sunday night and last night I was finishing a piece when my daughter comes up to me with a sign that the City of Houston left in my yard. I don't mean one of those little yellow notes on my door. I'm talking about a big yellow legit sign with a wooden stake that they stuck in my front yard kind of sign. The kind that announces to the whole neighborhood and anybody driving by that you're a messy person, like they can't already see that for themselves. 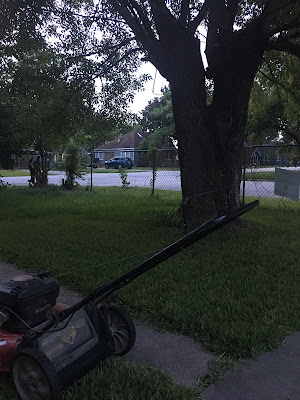 My Half Cut Yard on Sunday Night

Apparently someone reported me because the weeds in the deep ditch that runs next to my house are too high. That same stupid ditch that I've told the City is too deep for me cut. It's a drainage ditch with a huge drain. They used to cut it and now they don't. There were some other things in my yard that I take full responsibility for, like a pile of branches. Those are me procrastinating and then cutting my ankle. I called the City of Houston today and discussed this all at length. The lady confirmed that a neighbor called it in.

My other theory is that the people who are always trying to buy my house think I'm poor and that they can bully me into selling by bogging me down with fees. I've heard that's a tactic. Or it could be the people trying to sell their house across the street. Whoever it was, the City is now involved and I guess I've been warned. I'm all out of time extensions in life to get this stuff done around my house.

As if all of that wasn't enough...when I went to help turn on the water for Miranda so she could take a shower (she had surgery on August 1 and she isn't at 100% yet) I found a mouse in the tub. Yes... a mouse.

Before you start totally judging me, since I just told you I got a City violation notice, and as if that isn't bad enough, I have an old house and it's Houston. My house was built in 1940 and it's on pier and beam. A mouse got in somehow and it found its way into my bath tub. Seth said the cats are just for show and I'm thinking of firing their asses. They did nothing when they saw the mouse and they ran out of the restroom.

It scurried around and around trying to get out to no avail. I freaked out and screamed. The kids came running with a bat and a golf club. We didn't want to bludgeon it or drown it, the only two possible options. We got the idea off the Internet to put glue across a cardboard. That didn't work. Finally I thought of emptying out my "Jar of Happiness" from 2017 and Miranda told me to put peanut butter in it.

It got so excited that it almost made the jump out of the tub and we didn't want it getting out and running around the house. Miranda thought of putting cooking oil around the inside of the tub. That way the mouse would slip when it tried running up the side again. That worked. We were at our wits end when the mouse finally got tired, or was trying to find a way to get away, and it ran into the jar. Miranda immediately covered the top with a piece of cardboard to keep it inside. She carried it outside and released it across the street.

The irony was not lost on me that we caught the mouse in the "Jar of Happiness." I thought about how we filled that jar in 2017, but once 2018 started off on the wrong foot I never started a new one. Maybe the Universe is sending me a message. Maybe that mouse was a sign and catching it in that specific jar was a sign that I need to start a new happiness jar to get on with this year.

Posted by ShoeGirl Corner at 4:58 PM