Steady and Well-Ordered in my Life

It is hotter than heck in Houston right now. I have been getting out on sales calls and the heat is intense. Yesterday I got the bright idea of taking the train down to a sales call on the other end of downtown but soon realized it wasn't such a great idea. First I had to walk one block down to Main St and then one more block down to the train platform. Once I got off at my stop, which I must admit I arrived to really fast, I had to walk three blocks to the building. When I got there I was sweating! I had to stop off in the restroom to wipe my face and to cool down. And I was wearing a cotton t-shirt and skirt! Imagine if I was wearing a suit. It is just too hot right now in Houston for anything like that.

While on my walk down the sidewalk I noticed a couple of interesting messages. Here is one. 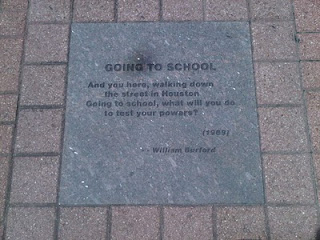 I passed another one, but I was too hot to stop and take a picture. They were on St. Joseph Parkway. I have no idea who William Burford is and when I tried to Google him nothing popped out at me.

My only consolation during the summer is the thought that it's really only this hot in Houston for two months and it's only hot all together for four months. The rest of the year is nice. In fact, we had a nice long winter this year. And this is the last month that we will have to suffer this way. At the end of September it will start getting cooler, hopefully...

The Chinese are still coming by to visit my blog and I've received two contradicting messages. I think one is from the Communists and the other is from my friends. The Communists say, "A friend to everybody is a friend to nobody." What's that? A warning because I'm letting people use my blog as a channel?

My friends said in Chinese and I translated it, "Like it here - Support your update." Nice message guys! I'm glad you like it here too. It's been my online home for almost six years now.

The end of the heat also means the end of the summer and this has been one lazy summer! I'm almost glad the kids are going back to school because it will put us all back on some kind of schedule. I've already started trying to put them on a schedule, giving them a check off list they need to work on each day. It includes the norm, like wash your face and brush your teeth and moves on to more specific things like get exercise and work on your math. They also need to start going to bed early and waking up early. They've been at home this summer with Daddy so they haven't even had to wake up early.

I'm trying to put myself back on a schedule too. I've been extremely delinquent about going to the gym, among many other things. School will get me back on track! I hope...

One very hard decision I have had to make is to pull down my Hips 'n Salsa blog. I'm not really pulling it down all together, but I'm not going to update it on a regular basis any more and I'm not going to list it on the Latina Lista website as a partner. I just don't feel like it's fair to Latina Lista if I'm not updating regularly.  So there you go. I had to let go of one thing to make room for other things.

I read this quote this week and I feel like it is very fitting for me and my writing. I must get organized in order to do really great work. I want to enter some writing contests, more for the discipline and so that I will make the time to write, than to win. Entering a contest gives me a deadline. August 30 is my next one!

"Be steady and well-ordered in your life so that you can be fierce and original in your work." -Gustave Flaubert. Sorry William, I think I like Gustave's quote a bit more.
Posted by ShoeGirl Corner at 10:28 PM