I Think I Was Looking Forward to "Fall" Way Too Much 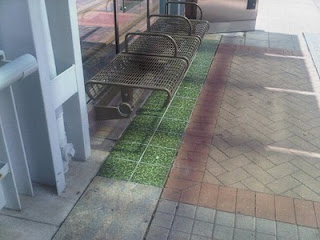 This is fake grass y'all! It's under the bench at the Metro Rail. Kind of creepy!
So today I decided to get brave and to venture out again on walking sales calls, despite the melting Houston heat. I took the train down to the Bell St exit and I walked over to a building on that end of Downtown. When I was coming back on the train I noticed something kind of weird. Under the benches they have pictures of grass. Is that strange or is it just me? I'm trying to understand their reasoning for that.
Then I started thinking about Houston and what a cool city it is. I started thinking of a list of things I was going to write about on here. Things that make Houston interesting or weird or maybe things I had never noticed about it before. So that's what I was thinking about all innocently as I left my last sales call when SPLAT! 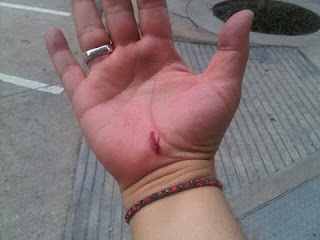 I lost my footing and my ankle twisted to one side and down I went on the sidewalk, hands out. Here is the damage.
And here is the scene of the accident. 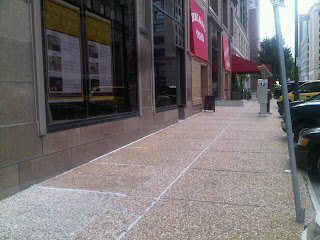 It happened on the corner of Franklin and Travis, right in front of the Hong Kong restaurant, well a door down. Notice the rocky sidewalk with those sharp little pebbles. One of those little pebbles tore open my hand nicely. At first I just sat there on that sidewalk you see here. I was mortified and embarrassed. All the cars at the light or passing by on Franklin saw me fall. One truck slowed down and I prayed that it wouldn't stop. So I just sat there and regained the little pride I had left and pushed up with my good hand.
Once I got moving down Travis St. I called my husband because he was coming downtown to meet me for lunch. He hadn't left the house yet so he got some band aids to bring me. Then I cursed myself for forgetting my Wet Ones. I always carry a package of wipes in my purse. They come in handy when you have two kids. Well this morning I was going to put a new package in my purse and I forgot. It would have been nice to have a wipe to clean my hand just then. I walked all the way down Travis to Cabo, around three blocks, with a bloody hand. I didn't wash it until I got to Cabo so who knows what germs crawled up into my system. Lovely...
Now I don't have anything cool or weird to tell you about Houston except that Metro has pictures of grass under the benches at the Metro Rail platforms and it doesn't even make any kind of sense. If I had anything else to say I promptly forgot it all after my fall.
What's funny is that when I posted my last blog on Facebook yesterday I said I was really looking forward to "fall." I totally meant the season and not a literal fall. I think my message got lost in translation somehow. And another thing that's really funny and ironic is that when I started my journey around Downtown this morning I was feeling so optimistic. I was declaring my goals and aspirations out loud while walking down the sidewalk. (Yes, I probably sounded like those homeless people that talk to themselves, but "when in Rome," right?) I think that message also got lost in translation because instead of having wonderful positive things come back to me I was splattered all over the sidewalk only an hour later.
My post on interesting little things I've noticed about Downtown Houston will have to be saved for later.
Posted by ShoeGirl Corner at 11:07 PM