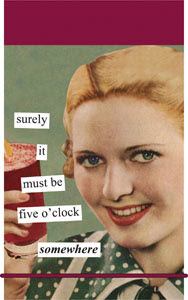 I bought napkins with this Anne Taintor quote on them at one of my favorite little boutiques, Neal's Cheezy Co. on 7515 Main, #180. Let me tell you why I needed them.

Yesterday these things happened to me in this order.

I had to wake up really early to take both kids to school and make it to a sales meeting downtown. So I was prepared and I made my shake night before. All I had to do was blend it with ice the next morning. Instead,

Yeah, my life is too exciting. I was exhausted by the time I finished work, made dinner, visited my dad, bought groceries and came home to put them all up and take a shower.

I was reminded of a book that colleague told me about. "Soy mujer, soy invencible ¡y estoy exhausta!" (I’m a Woman, I’m Invincible, and I’m Exhausted) I need to read this book.

Posted by ShoeGirl Corner at 4:33 PM

I feel exhausted now after reading your post and my day is about to begin.

Girl, you are just too busy.