Every Princess Deserves a Tea Party! 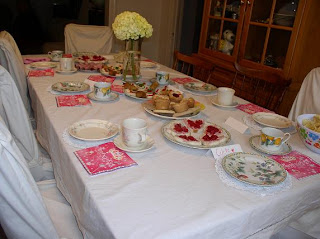 The table set up really pretty. Rey chose that bouquet. We used china that was given to us for our wedding by my late mother and Rey's late grandma. 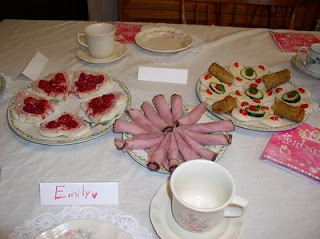 The food. The recipes are from a Princess cookbook my daughter found at the library. On the left are the heart shaped raspberry sandwiches, made with raspberry preserves mixed with cream cheese with fresh raspberries on top. On the right are the butterfly shaped cucumber sandwiches. They have cherry tomato slices on top with a mint leaf in the center. (I actually was domestic and made the sandwiches!) Those are halves of egg rolls in between and in the middle of the two plates rolled up ham. 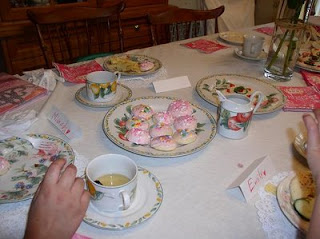 Here are the sugar cookies made by Rey and my mother-in-law. See the pretty pink homemade icing and sprinkles. Rey decorated them. That's "very berry" tea which is chamomile tea made with honey and poured on top of berries in the tea cup.

So school has started and my daughter wanted a "back to school" party. With all the activity prior to school starting it was going to be kind of hard to do that, so I convinced her to do it this weekend, especially since it's a holiday weekend. Little did I know what a week I was going to have.

This was a really nice way to finish a bad week and to remind me of what is really important in life- The look of happiness on my daughter's face when she has a princess tea party with all her girlfriends. Priceless.

Posted by ShoeGirl Corner at 3:44 PM

You truly are a great mom. I wish I was more like you. Why do I have to be so dark and evil? My poor kids. : )