When I was young and single my mother used to tell me I was "libre y en Tejas" or "free in Texas." She especially said that to me when I would call late at night to tell her I was spending the night at a friend's house. After she died and after my divorce I had this Texas charm engraved with the word "libre." 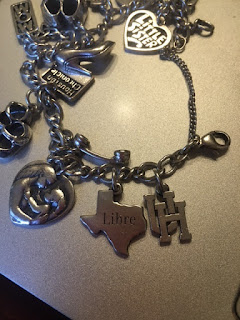 The thing is though, I have never been truly libre. I lived at home until I got married at 27, like a dutiful Hispanic daughter, I was married for 14 years and after my divorce I had 2 children. Then a year and a half after my divorce my father moved in. In other words I have lived with a man, except for that short year and a half, my entire life. If you add the fact that I have lived with my children since my divorce then I have never lived alone. Never. Even the summer I did an internship in Florida in 1991 my mother's stipulation was I had to live with someone so I rented a room from two older ladies.

The hilarious part about it is that I am not the kind of person who has to live with someone or needs to have someone in her life. I enjoy being alone and I have never had a problem doing things alone in the past. I've traveled alone, I've gone to concerts and I eat out alone. I was reading my journal from 1992 recently and I had so many entries where I did things by myself. I'd go to Fitzgerald's to hear a band play if I wanted to and I usually ran into friends there. I'd go to parties alone as long as I knew the host. I once traveled to Spain and back. I was with friends in between but I stayed by myself in my own pensione and had some nights out alone.

This past Friday my ex-husband picked up the kids right after he got out of work. That meant that I didn't have to rush home to get them packed and ready to go like I usually do when they go over to his house. I had plans to attend a lecture performance that night and I realized that I could go straight from work and I even had some extra time before it started. The event was at the Byzantine Chapel at the Menil. I'd wanted to try the Bistro Menil but I always have the kids in tow. This time I had nothing to hold me back. I stopped there first and ordered a glass of wine and a small appetizer, some ahi tuna. Everything was delicious and I wrote a rough draft for this blog while I sat at the bar.

When I was finished I drove over closer to Byzantine and found a parking spot on that block. The lecture performance wasn't exactly what I had expected. It was more of a reading than a lecture and the girl was really really young. I enjoyed it none-the-less but more than anything I thoroughly enjoyed being out by myself. It was such a liberating moment. It's not that I can't do that if I want to, it's simply that I don't do it any more. Not like I used to when I was young. I felt so free. So libre!

After the lecture I met up with some friends for margaritas and I finally saw my friends' company. It was much needed ME time and a wonderful night. As I'm getting older my priorities are shifting. I get so much pleasure from those stolen moments without the kids or my father.

I wrote last time about becoming an empty nester and preparing for life after kids. Part of that preparation is getting out again.  I want to have more nights like the one I had on Friday and I will. In the words of Morrissey, "I'm OK by myself."
Posted by ShoeGirl Corner at 10:45 PM