Falling in Love with Fellow Prisoners by Gwendolyn Zepeda

A few years ago before Gwendolyn Zepeda was Houston's Poet Laureate I heard her read at Inprint's First Friday. I've pretty much followed Gwen Zepeda's writing since I read about her in the Houston Press and attended her "Quinceanera I Never Had" reading event. By the time she read at "First Friday" she had already published a few books, but I had never heard her poetry. 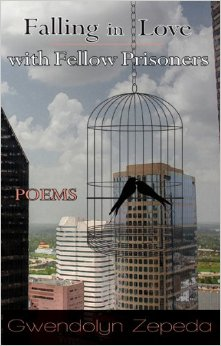 There was one poem in particular that spoke to me. It was her poem "Proposal" that can now be found in her new book of poetry, Falling in Love with Fellow Prisoners. I loved that poem from the moment that I heard it. The funny thing was that I was married at the time so someone could ask why I loved the poem so much or how I could relate to it.

I think that many women can relate to the poem, even married women. I believe that as women we are socialized to grow up, get married, live happily ever after and sometimes women put their dreams on the back burner. That has always been an idea that I have struggled with because even married women should be married to themselves first. How else can you love yourself and in turn love your spouse and your family? I know many people don't agree with this idea and that's okay.

I subscribe more to the idea that a woman should put on her oxygen mask first. If I didn't do things to keep my sanity I wouldn't be able to take care of my kids and now more recently my elderly father. I have to be very sane in order to do what I do every day. If a woman is committed to herself she can be even more committed to her family.

Fast forward in time. Gwendolyn Zepeda published her book of poetry and I went to her reading. She didn't read "Proposal" that night, or she read it before I got there, so I didn't know it was in the book. She read a lot of other great poems like, "The Mexican in Me/The White in Me" and one of my other favorites, "His Son is His Everything."

I pre-ordered the book that same night but life carried me along the way life does and I never got to the bookstore to pick it up.

I was reminded about it on Facebook again and I mentioned "Proposal" to Gwen in hopes that I didn't sound too much like one of those weird obsessive nut/fans. (I had mentioned it to her before and that I lost my copy.) That's when Gwen told me that the poem was in her book and I remembered that I never went back to Brazos Bookstore. I made it a point to go pick it up and as soon as I got in my car with my book I turned the pages to the poem and I read it to my sister, as my son listened in the back seat.

It had been so long since I had read the poem that I had even forgotten the title. As I read it I was moved again by Gwen's words.

I've been divorced for two years now and the words never rang so true to me. I don't plan on remarrying and if I ever do, it won't be until the kids are in college or at least nine more years. I know that I don't know what can happen in nine years. I realize that. But for now, that's the plan.

I'm a single woman again and I want to be married to myself more than ever before. I am the woman I deserve and the last stanza of the poem is my very favorite.

"The day has come and I swell with pride.
I've finally captured the girl I deserve.
I'm ready to be my own bride.
I'll lock the rest of the world outside."

I'm ready to be my own bride.
Posted by ShoeGirl Corner at 10:26 PM