Controversy About Magnet Schools in Houston

I've been somewhat following all the talk in the news about the magnet school recommendation. The one that the HISD superintendent decided to hold off on until the 2012-2013 school year. I must admit, I didn't attend the meeting with Houston Independent School District that many parents attended to voice their concern over the cuts and changes. But then I read a Houston Chronicle article about the whole situation and I was appalled by the comments that I read from our readers. I wondered how many of them had actually attended, or had children attending, a magnet school. 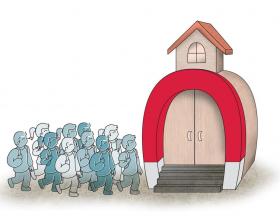 When I was a little girl in elementary school my parents sent me to my home school like so many parents do in this city, especially Hispanic parents that don't know any better. I quickly excelled in school with high reading and vocabulary scores. I was always at the top of my class and struggled very little. Math wasn't my strength, but I really think that was psychological because now that I use math as much as I do in my adult life I do okay.

When I was in 5th grade we had a new principal who took an interest in all of the kids with high test scores and I was one of them. My friend and I were writing and drawing a comic strip about two young single girls and I showed it to her. She was very impressed and she asked my teacher about me. My teacher shared my test scores with her and she recommended me and a group of other students to take the Vanguard test for middle school. And that is where my life changed.

I went to a Vanguard middle school that fell under the Magnet program in HISD. This is where it gets interesting. When I went to Hamilton Middle School I found out how little I really knew. I had always been the smartest kid in my class and now I knew why. I wasn't learning anything!

That is why I know that these schools in the lower income neighborhoods aren't always the best. The kids that had gone to Vanguard or other Magnet elementary schools knew way more than I did. I was perplexed that I never really learned where the equator, Tropic of Cancer and Tropic of Capricorn were. All these other kids knew these things and I didn't. I was embarrassed and I had to work twice as hard than most of my friends. I survived middle school as a B-C student, but it was a great learning experience. On my very last semester of 8th grade I finally made the honor roll. I felt so proud because it took me so long to get there.

When I was reading the comments from different Chronicle readers I read some from people who obviously didn't have first hand experience with the Magnet program. Some of them said that Magnet schools were for rich white people. That isn't exactly accurate. I wasn't a rich white kid. I was a poor Hispanic kid and I knew a lot of other poor minority kids who were in Vanguard. Magnet programs are for everyone, but they can also be a lifesaver for poor minority kids who wouldn't have had an opportunity to have such a great educational experience otherwise.
Posted by ShoeGirl Corner at 7:27 PM