My Daughter is Addicted to Astro Boy 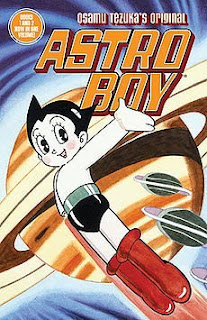 My husband introduced my daughter to Astro Boy. It's a cartoon he used to watch in the 80s when he was a kid. My daughter fell in love and now she's been watching every show that's available on the Watch Instantly feature of Netflix.

I wikipedied him to see what it says about him and I was surprised to learn that the show ran from 1963-1966 in Japan and that it was actually the first anime cartoon. Rey thought that Speed Racer was first but I guess it was the first one we saw here in the U.S.

I think his red boots are hilarious and I told my daughter so. She said that he got those when he was in the robot circus. I'm worried. I also saw that there are 193 episodes and I'm afraid she's made it her goal to watch all 193.

I asked her and she told me only one season is available to view. Woo! Good! I'll have to monitor that.

It's Sunday and I brought a bunch of work home with me. But I also need to go grocery shopping and I need to work on my laundry.

I wanted to take the kids to the Children's Museum. I bought a membership for the kids and I'm yet to take them again. Why does that always happen? I think memberships are great for stay-at-home moms. Too much to do and never enough time!
Posted by ShoeGirl Corner at 1:58 PM