The May issue of the Houston Chronicle's luxury magazine "HC Magazine" has a great article about the Painted Churches of Texas that I loved reading. I recalled reading something about this a few years ago, but I had forgotten about them. I'd been thinking about going to visit some of them, at least the ones close to Schulenburg, for the last few weeks. I decided that I would set out on a solo road trip on Saturday. 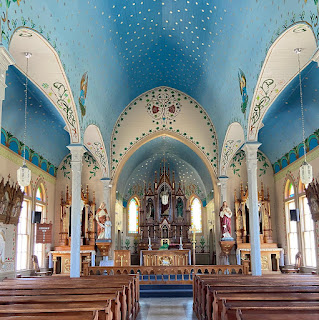 I am SO GLAD I took this trip. I can't say enough great things about it. I drove to six churches around Schulenburg and I was able to go inside of five of them. It would have been only four, if I hadn't been patient and killed time at the first one. I lucked out when a tour came by, a family of four at their last church of the day, which happened to be my first. That was at St. John the Baptist, German Catholic Church in the hamlet of St. John, between Schulenburg and Moravia.

Besides visiting these beautiful churches my second favorite part of the trip was the drive. And my favorite drive between two churches happened early on when I left St. John the Baptist, the German one, to drive to Ascension of Our Lord Mission Church. According to the addresses they are both on FM 957 so I figured, "Oh, just up the road!" and my Waze app seemed to agree with me. Well, it was up the road, but up a very long way. What probably made it seem like a much longer drive was that the road was so narrow so I was driving slowly and cautiously. It was unpaved in some areas, either rocky or red clay. 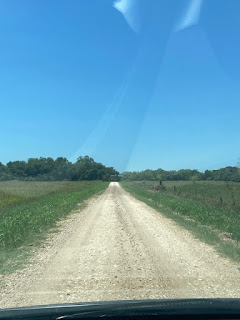 At one point the road was really narrow and drove through a wooded area. Sometimes it was curved and I especially had to be cautious about someone driving fast from the other direction, not expecting me to to be traveling on this lonely road. I did see houses all along the route, but I literally did not see another car on the road the entire four mile drive until I arrived in Moravia near this general store. 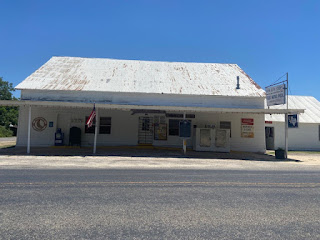 Unfortunately the second church was locked so I had to proceed to the third church near Flatonia. That was almost 12 miles away and I enjoyed that drive too. The roads rose and dipped. The area is definitely not flat like Houston. It's amazing that the landscape can be so different just an hour and a half outside of my city.
I loved the landscape! I loved passing farms and animals, cows, goats, and horses along the way. The land and trees looked so beautiful and it was surprisingly still semi-green, despite the extreme heat and little rain this summer. I passed all kinds of houses, large and small. I went by really big beautiful homes, modest medium sized homes, tiny shacks and trailers. There was one house built into the side of a hill of dirt. 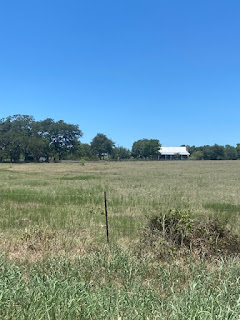 As I drove past I wondered about the people who lived in the houses. I always wonder what people in small towns do for a living and why they choose to live there. Some of the big pieces of land, that were either a farm or had their business on the same property, had signs announcing their business. However you don't know with all of them. You can only wonder about the people inside like I did. I loved how so many of the houses had chairs in the front yard to look out at the road and the land.
After I finished going to all six churches I wanted to go somewhere good to eat. I asked a local woman dropping off flowers at the church in Dubina. Sadly she said there aren't any real good restaurants in the area. I saw that there was a vineyard with a winery nearby, but little did I know that I was about to make a full circle back to where I started at the first church. 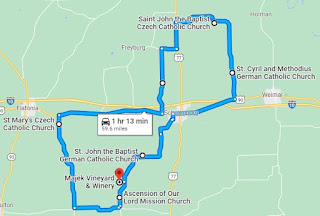 I ended the day at the Majek Vineyard and Winery. I did a wine tasting and I highly recommend it! I had a Greek salad and I wish I'd tried the bread. The couple at the table next to be raved about how good it was. Next time! Also, there's another vineyard right next door that I'll have to try, the Moravia Vineyard & Winery. They're only open on Saturday, noon to 6 p.m.
I overheard another conversation about the lack of good restaurants nearby, from a group of visitors and the couple, who were residents, at the next table. Apparently there's a need for a really great restaurant if anyone is interested in opening one in the Schulenburg area.
I didn't go to the three churches north of Round Top, so that's the plan for next time, and I don't mind revisiting some of the churches I've already seen. I'm also interested in spending the night in a bed and breakfast. Plans for the future!
Posted by ShoeGirl Corner at 5:28 PM