I almost didn’t write this second part because so much more has happened between February 16 and today that I have even more to write about. But in interest of following the timeline and explaining what happened in between I have to write about my hospital visit. 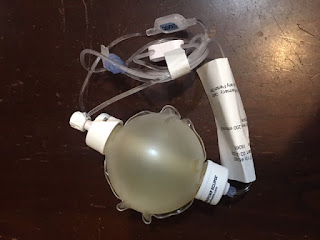 Smaller Ball of Daptomycin
I started having a reaction to the Vancomycin on Tuesday afternoon, February 5. I called the 24 hour nurse and she told me not to give myself my evening dosage of Vanco. It started with a light rash across my chest. By the next morning it was all over my face so I went to the emergency room.

By that afternoon I was admitted into the hospital next to the professional building with my infectious disease doctor’s office. He requested that the emergency room doctor send me there and he went to see me. I was in an observation room from Wednesday afternoon until Thursday evening. The rash just kept spreading across my face and my body. They kept me to make sure it didn’t get worse and go into my throat. Since they still had to treat my toe infection the doctor asked the hospital to put me on Daptomycin, another antibiotic.

By Friday I was dying, not literally but from the itching and watching the rash spread. I had a terrible night and slept very little because the rash was all over my body. My back had itched terribly all night. I called my primary care physician to let her know where I was and what was happening. I unleashed all my frustration on the poor doctor who came to see me on Friday morning.

I was so lucky because she was a God-send. Her name is Dr. Juhi Jain and she works at Memorial Hermann Memorial City. She listened to me, cared, and took an aggressive approach, increased my dosages of steroids and Benadryl and moved them closer together. She was with me for four days so she was able to watch my progress.

Dr. Jain also gave me the best explanation of what was happening to me because I was freaking out. She told me it was as if the train had left the station and it had to run its course all the way before it could come back. So the rash had to run its entire course. As depressing as that was, it helped me understand and accept it. I surrendered to the rash, knowing that it had to happen before it could get better. She got aggressive with the medication for two days then pulled back to watch my reaction for another two days.

On Monday evening, my 6th day in the hospital, Dr. Jain sent me home with oral steroids and over-the-counter Benadryl to take for a week.

Here is what I found out about Vancomycin. Yes it has the best track record for healing bone infections but it’s also the most common antibiotic given because it’s the one that the insurance approves. Daptomycin is actually better than Vancomycin and people have less of a reaction to it but the insurance doesn’t approve it unless you can’t take Vanco. Yes, they wait for you to have a reaction to Vancomycin before they approve Daptomycin.

This whole ordeal has been such an experience. I had never been in the hospital that long. Thank God for insurance. Talk about being grateful for the things that matter, like insurance and my employer. Good doctors like Dr. Jain. So many things.

When I got out of the hospital I went to see my infectious disease doctor the next day for new smaller buzzballs of Daptomycin and a dressing change on my picc line. He decided to send me for a follow up MRI. I can see why he did because the allergic reaction could have compromised my healing. They were pumping me with steroids while I was in the hospital. The steroids were making my blood pressure and my blood sugar sky rocket. My body was trying to fight all these other things while they continued to give me the new antibiotic to fight the infection in the toe.

I went for the follow up MRI the Friday after I was released from the hospital and I knew I probably wouldn't have the results until the following week. I have played the waiting game so many times during these past three months.

All I can say is thank God for gut feelings and for doctors who decide to check things just to make sure we are on the right track. It’s a good think Dr. Price sent me for that extra MRI or I don’t know what would have happened to my toe. To be continued…
Posted by ShoeGirl Corner at 12:33 PM