I Love New York Once Again, for the Seventh Time

This was probably my seventh trip to New York. There was the first time when Miranda was a baby and I went alone for a conference. The second time I went it was with Rey and it was his first time there. I went for a conference and he had a blast exploring the city alone. I remember that as one of the best trips we ever took, when we had the most fun. There was the time we went when there wasn't a work conference but we did because we had a free stay at a hotel. I went for a conference again in 2008 and Rey went that time too. After my divorce I went with Vicki in 2012, also for a conference. Then the last time I was there I went with both kids. That was in 2013. This time I went with Miranda and we went up to visit Long Island University. This is one of the universities that has accepted her.

Every time I visit New York I feel like I belong there. It's funny that I do because I really do love Houston. I'm very proud of being from Texas. Part of me thinks I just feel that way because I'm visiting and I don't live there but I have felt that way every single time I'm there. I love the energy, I love taking the subways, I love the feeling of something exciting happening.

I had never been when it snowed! This visit there was a little bit of snow on the ground on Friday when we toured the university in Long Island. Then overnight it snowed and we woke up to snow everywhere, especially on our walk to the Brooklyn Museum. It was still snowing a little when we woke up and looked out the window. It was beautiful but hard to walk around.

We packed a lot into our short weekend trip. We arrived Friday morning and we went straight to LIU and spent the whole afternoon there. Miranda got to sit in on a nursing lab in their state of the art "hospital." They have an amazing setting for the kids to learn and they are going to build them an emergency room across the hall. So cool! LIU is offering her a very generous merit scholarship to attend the School of Health Science and to be a part of the Honors program. We just have to pay for room and board, which is going to be a stretch but we may be able to do it. I feel that if she attends LIU's Health Science program she will be more than prepared to take the MCAT and to apply for medical school.

She's also been accepted into the University of Houston and Sweet Briar but we are waiting to hear from around four more schools.

By the time we were finished at LIU we were tired and starving. We ate as soon as we arrived at Penn Station and then we went on to check into our hotel in the financial district. We'd been up since 3:30 am, with only a short nap on the plane, so we were ready to go to bed!

Saturday we went to the Brooklyn Museum to the see the Frida Kahlo: Appearances Can Be Deceiving exhibit. It was an amazing exhibit that brought together all the different exhibits I've even seen in my life but it was the first time Miranda saw any of it.

I've been a Frida fan since the early 90s so I've seen a lot of her art. Somewhere between 1995 and 1996 I saw an exhibit of her father's photography in Salamanca, Spain. That was a rare and unexpected treat. In another exhibit I saw in the last 25 years I've seen photography by some of her friends, like Tina Modotti. In 1995 I traveled to Mexico City and went to visit Frida's house, the Caza Azul. I definitely did not see as much as her clothes and personal items on that trip. That was because a lot of the personal items in this exhibit were just brought out of storage in 2004.

This exhibit was more about all of those items that are finally out on display. We got to see her clothing, her jewelry and her make-up. We saw her abdominal casts that she wore, with all her artwork on them. They had her prosthetic legs and her custom made shoes. There was some art, but if you are going to see her artwork you'll be disappointed, there is less about her paintings and a lot more about her life, her personal items and many photographs of her. So many photographers were in love with her and wanted to take pictures of her.

After the museum we took the subway up to the upper west side of Manhattan to Zabar's, one of my very favorite places in the world. If I ever live in NY I'm going there every single week. After Zabar's we went back to the hotel to rest and for Miranda to do homework. After that we headed out to see Chicago, Miranda's first musical experience.

After the show we walked to Gray's Papaya and had hot dogs. Miranda took this picture of me in front, to recreate the photo on my blog from 2005, fourteen years ago! 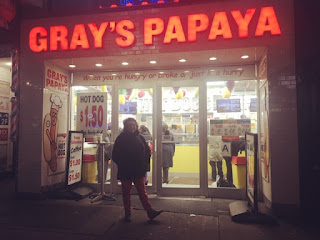 Sunday morning we woke up early and after breakfast we headed to the 9/11 Memorial Museum. I've been visiting New York since 2003 and each visit I've watched the progress. In 2013 when the kids and I were there the two pools were finished. It was definitely an experience to walk through the now finished museum and to hear so many of the heart-wrenching stories again.

I came home and my love for New York was just solidified. I want to live in New York in a tiny apartment like Carrie Bradshaw's. I know that's just a fantasy, especially at my age, but you never know. Seth is still in high school for three more years and we'll see where he ends up for college. Then we will see where I end up.

I want for Miranda to go to the best school who makes her the best offer. I want the best opportunity for her. But I'm not going to lie, if she ends up in New York I will be thrilled. I can live vicariously through her and I can visit her every year.
Posted by ShoeGirl Corner at 10:43 PM