I know you all have been wondering what's the deal with the mascaras. I wanted to give each one its fair shot so I've only tried two mascaras for 2-3 days each. I've tried Maybelline's the Colossal Volum Express (Cat Eyes) and Rimmel's Scandal Eyes. So far Maybelline's Colossal is ahead. 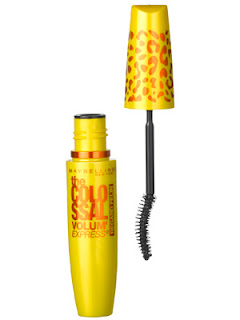 When I set out to review these mascaras I received a lot of different advice. I was told that I have to use an eyelash curler first and in between coats. I was told by some women that they use one mascara as a base and then go back over it with another mascara. My niece told me I had to do this sawing and pulling motion to pull the lashes out. Others tells you that you need to separate the lashes. I don't want a mascara that causes my lashes to stick together.

Too much work in my opinion! More power to those of you who do this and there's nothing wrong with that. It's just not for me.

I talked to one of my best friends about this. She agreed that she too was looking for a mascara that was so good that all you had to do was apply a couple of coats with no fuss and go. We are busy women who don't have a lot of time to fuss with our make-up but we do want to look nice. We've never really been that girly girly where we take a long time with our hair and getting dressed.

I thought to myself, "There have to be other working moms and moms with toddlers out there like me. Or just women who don't like to spend a long time on their eyes but who want a good mascara."

I don't expect for my eyelashes to look just like the model's on TV. I know she probably has naturally long eyelashes like my niece.

I applied 2-3 coats of each mascara and the Colossal made my eye lashes look longer and there was minimal clumping. My lashes didn't look as long with Rimmel's Scandal Eyes and there was a lot more clumping.

That is my goal. I still need to try Revlon Lash Potion and I already had Maybelline's Lash Fusion and their Stiletto but I want to try them both again with the same scrutiny that I've tried the other two.

Update: I just tried Revlon Lash Potion and I think my lashes may look even longer than with Colossal but it looks like my lashes are sticking together more. I'll try it again tomorrow in full eye make-up mode to get a better idea.
Posted by ShoeGirl Corner at 3:08 PM