And We're Out of the Waiting Place

The wait is over! 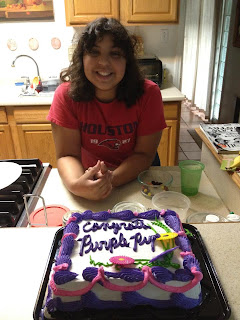 On Friday I got out of teaching a class and I had a couple of missed calls so I checked my voice mail. And there it was... The call we had been waiting for all week. The call telling us that Miranda made it into our first choice middle school for Vanguard. I was thrilled!!

Apparently they moved down the waiting list quickly because Miranda was #65. The voice mail message said that I have until 8 a.m. on Monday to accept the invitation. Just on a fluke that they were still there working late I called. Of course they weren't working on a Friday at 5:30 so I left a voice mail message for the Vanguard coordinator and also followed up with an email. I'm making sure I cover all my bases and I'm calling again to confirm at 7:30 on Monday.

After that excitement I debated how I would surprise my little girl. I didn't want to just call and give her the news over the phone. I finally decided on some cupcakes from Kroger so I called my niece Hannah who takes care of her and her brother after school and told her that I'd be a little late. I had already worked late for a Friday too.

So I ran off to Kroger but when I got there I saw this cute little purple cake (above) and I asked the cake lady if she could add something real quick. She said she could and I debated what to write. I didn't want to just write a lame, "Congrats on Lanier" and "Congrats on Being Accepted at Lanier" just seemed way too wordy for such a little cake. Finally I remembered that their mascot was the Purple Pup. That just seemed very appropriate and I knew that it would take her a minute to get the message when she saw it.

My plan worked. When she saw the cake it took her a full 5 seconds to get what I really meant. When she realized that she'd been accepted she jumped for joy. I was so happy for her! It was so worth the wait and getting the cake. One of the wonderful joys of motherhood.

I know that Lanier is a really great school (not only one of the best Vanguard schools in HISD but also one of the best city wide) and I want for her to have the best foundation now for her future. That little girl has big goals and I want to give her all the support that I can as her mother. I want her to achieve more than I did because that's how it should be. Hugs to my big girl!
Posted by ShoeGirl Corner at 1:18 PM