Breaking Away From Control

Recently I seem to be hearing so many stories about domestic violence and controlling partners. Partners who think they can control a woman and if they can't they will resort to physical violence if they have to. They think they can force her to do what they want. I admire women who have had the strength and the courage to break away from controlling situations. 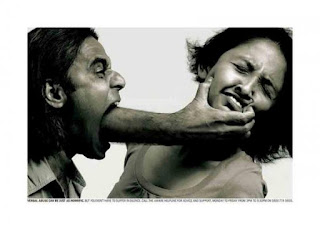 (Image borrowed from Emergency Egg)
In many of these situations controlling behavior starts verbally. In this great article that I came across it makes so many good points and the image that I found to express verbal abuse is such a great illustration of what a partner does when he (or she) is verbally abusing a partner. This is exactly how it feels.
The sad thing is that these partners do not realize how the controlling behavior affects the other person. "Verbal abuse is a way of exerting power over a partner and denying her individuality." The more often that a partner is abusive the other person starts to question her own actions. She starts to believe that maybe she should have done something differently. The partner often says things like, "You make me this way. You push me to acting this way. You don't know how to talk to me."
The hardest thing for a woman to do is to realize that this isn't true. It is NOT her responsibility to make her partner feel a certain way about himself and it is not her fault if he acts out in anger. That is HIS choice and NOTHING is an excuse for verbal or physical abuse.

I'm not saying that the woman should be abusive too, or ugly, or provoke him. But it isn't her fault if she isn't doing any of these things or if all she is doing is expressing her feelings. With men like this a woman is not even allowed to express her feelings because it will set him off and make him lash out in anger. Thus the control.
When a woman leaves a controlling or verbally abusive relationship she can feel broken. She feels like her wings have been broken and like she needs to mend them before she can fly again. She has to take the time to heal and maybe even find her voice again. Sadly, if she's been in the relationship a long time she has to mentally heal too. She has to get her partner out of her head and she has to stop being afraid. Don't ever judge a person who has been in a relationship like this because you don't know what she has been through mentally and emotionally.
Despite tremendous progress in laws against domestic violence, an average of three women in America die as a result of domestic violence each day. EACH DAY!!! Those are staggering statistics and they need to stop.
There are some things that we can do to help and we don't have to wait for Domestic Violence Awareness Month to do it. Here locally the Houston Area Women's Center is always looking for volunteers. There's also La Rosa Family Services, who is always in need of funds and volunteers. Right now they are providing services at the Denver Harbor Community Center. If you can't volunteer your time, volunteer your money to organizations like these. If your company is involved with the United Way you can elect where your money goes. I've done this before with the Houston Area Women's Center.
If you are in an abusive relationship where you need to get out, do it now. Break away from the control! Don't become a statistic.
Posted by ShoeGirl Corner at 1:37 PM