My kids were watching "Meet the Robinsons," by Disney this morning. It reminded me of how much I love the quote "Keep Moving Forward" and how much it applies to me right now. 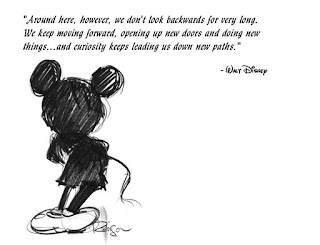 I also realized that I haven't blogged here about my impending change. I blogged about it over on skirt! but somehow never managed to mention it here. I know it's because even though I know it's inevitable, and there really isn't anything I can do, I sill feel a certain amount of guilt bestowed upon on me by society. That feeling that I'm a failure, even if I know it's not true. Yes, I'm talking about divorce- that dreaded word that I haven't used until now.

My days are numbered and although we are getting along just fine right now, very soon I won't be married and I'll be Loida Casares again. It's been almost 14 years since I've gone by that name. I wonder if I still know that person.

As self-reliant as I am, and as much as I believe in keeping my identity, I can't take away the fact that I've been married for that long. In those 14 years I've been a wife and a mother. I believe that when we give birth we give away a little of ourselves, both physically and emotionally. We have to give away a part of our body in order to give life to our child. Then as we raise our children we give away part of ourselves emotionally. As a wife we compromise a little or sometimes a lot. It's part of being a mother and a wife, but now I'm only going to be a mother.

I'm going to move forward with the plans that I have for the house and for the kids. I'll be starting a home remodeling project and I'm going to finish editing my novel for self-publishing. I also have to start working on middle school tours and applications this fall for my daughter. Life goes on and I do know who I am for the most part. The parts I don't know I'll have time to figure out in this new chapter of my life.
Posted by ShoeGirl Corner at 4:11 PM

Divorce is nothing to get yourself down about. It happens to the best of everyone and is a way to learn and grow as a person. I look forward in reading your self published novel.