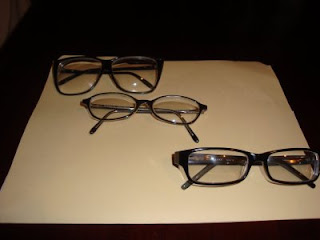 I bought new glasses recently (lower right hand corner) and my husband said, "Those look exactly like your other glasses."

"They are not the same," I answered and I went and got the ones in the top left corner and showed them to him, "They look completely different. These are Circa 1988 and HUGE!"

Then I realized something interesting. I've only owned like four pairs of glasses in my life. My first pair that I owned when I was 16-18 years old. Those were brown and the round style was popular in 1986. I wore those all the time.

Then I got the big 1988 Liz Claiborne pair when I was in my freshman year of college. I thought they were cool at the time. Back then I only wore my glasses and I even has prescription sun glasses. I got contacts at the end of college and that's pretty much all I've used in the years in between. Now I only use glasses as a back up at night when I take my contacts out.

A few years ago I bought the smaller calmer pair in the middle, but they were always too small for me. My original plan was to just get the lens replaced in that pair, but then I saw these glasses and I decided they were just right.

What I realized later when my husband pointed out the similarities was that my last pair is a perfect cross between the other two pairs. They are like what a kid of those two glasses would look like if they mated. But then that would be weird wouldn't it? Because my glasses are probably both female and they can't reproduce unless they are like those insects that reproduce all by themselves that are both male and female. OK. This is getting too weird.
Posted by ShoeGirl Corner at 4:48 PM