I've Decided It Is All About the Architecture

I went on a walk again through downtown and I decided it IS all about the architecture. 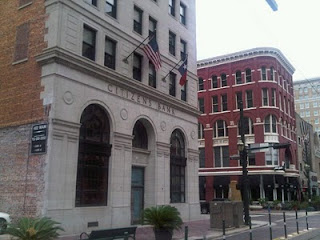 Citizens Bank at 402 Main, Built in 1925.
I took the train again down to St. Joseph's to a sales call. Now that I knew the route it seemed a lot quicker. When I got to the Preston train platform I was right in front of these beautiful buildings. Just look at the designs. Houston has some of the most beautiful buildings. I'm so glad so many of these buildings have been marked as historical because that means they have a better chance of survival. 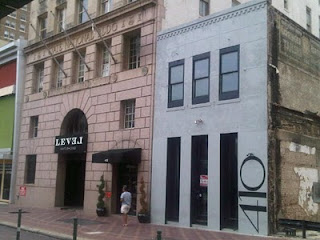 The State National Building at 412 Main St. I love the small two story building next to it. I think it looks so unique there next to the taller building. I would love to own that smaller building so I could convert it into my house. Yes, I would live downtown. 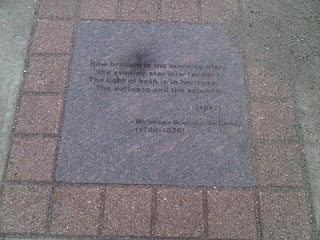 This time I stopped and took a picture of another Houston sidewalk sign. I found out earlier in the week that they aren't only on St. Joseph Pkwy. They're other places too.
Then on my way back to the office I snapped a picture of the place where I should live. 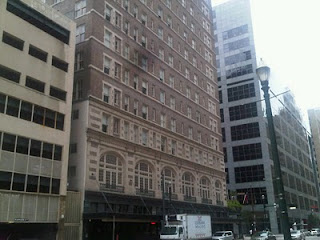 The Rice Hotel
When I first started working at the Chronicle in 1993 the Rice was closed and there were rumors that it would be remodeled and changed into apartments. I used to joke that if that ever happened I would live right next door, roll out of bed in the morning and go to work. They didn't remodel and reopen it until 1998 and by then I was married and I was thinking of a house. What was I thinking? Now that I own a house I think about how much I would enjoy not having a yard.
A couple of restaurants and a coffee shop have access to the Rice lobby and I think that's really cool. I love to sit in their beautiful lobby for lunch or for a coffee and imagine what the Rice was like back in its hey day. The artwork on the ceiling is breathtaking and if you sit really still you can almost hear the hustle and bustle of the original Rice Hotel. There used to be a jewelry store in the lobby, among other businesses, back then. The Rice was one of the places to be and many business deals were made in their bar.
I also LOVE LOVE LOVE all the restaurants and bars downtown. I remember when I was in college and a few years right after college when my friends and I would go to a dance club downtown called PowerTools. It was so underground and grungy and we loved it. Back then there were no bars downtown except for PowerTools, the Brewery Tap and La Carafe. Now there are all these bars and restaurants. I love walking down Main St and seeing that we actually have pubs now! There's Molly's Pub and the pub attached to the Rice building, Shay McElroy's. It makes me feel so European!
So I've decided that this is exactly what I was going to write about that day I fell. That and that I'm surprised at how many people take the light rail. I was coming back at lunch time Wednesday and a bunch of people were going into downtown for lunch. A lot! I had to stand on the way back and I had to hold on to the bar like I was on NY subway.
Now about one other thing. BlogHer.com. I want to go one day. I say that every year, but I'm very serious this time. I feel like it always sneaks up an me and then it's like this weekend. I am going to write it in my calendar for next year and I'm going to write "plan for BlogHer" six months from now. I would love to attend all the sessions and to attend the parties with other bloggers. It's this weekend and I'm missing it. Next year!
Posted by ShoeGirl Corner at 6:40 PM

OMG - I would so LOVE to go to BlogHer too! It's on my dream list. Maybe next year...

OH - and, as a Houstonian, and an appreciator of wonderful architecture, I totally agree! Houston has some fab old buildings, and new ones too. I think more peeps should look around them when walking DT, midtown, etc. Great stuff!